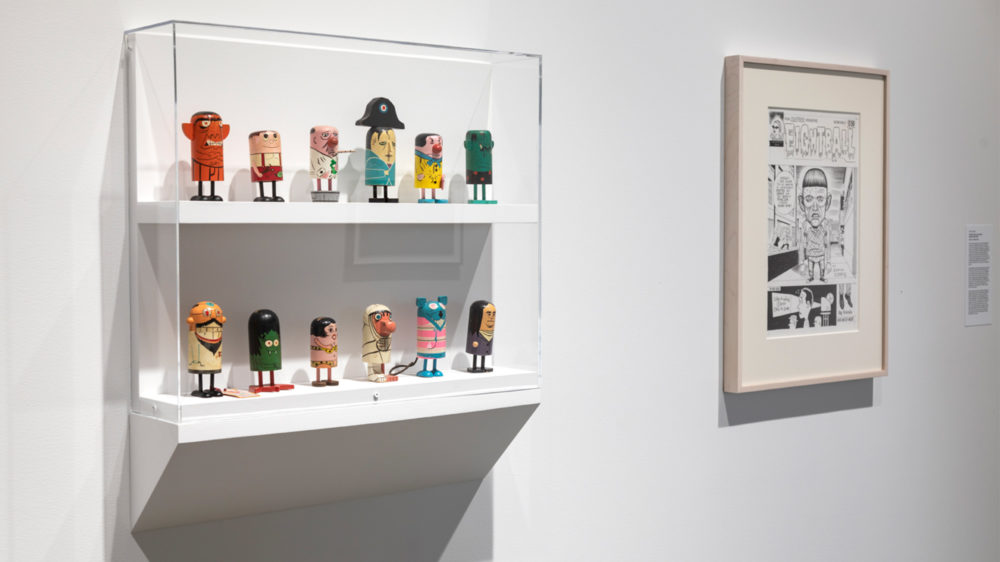 Exhibition: What is an edition, anyway?
Talks & Panels: Gallery Sessions: Enrique Chagoya
Music: No Age: Score for the Day Before

Cartoonist, author, and illustrator Daniel Clowes discusses his personal collection of Popsies figurines on display in What is an edition, anyway?, as examples of editions that have influenced his creative practice and their impact on his illustrative style, as pictured in an original cover drawing for “Eightball #8,” also on view.

Mass-produced in Japan in the 1960s and 1970s and distributed in the United States, Popsies are small, sculptural greetings with spring-loaded messages in the characters’ heads that are as grotesque and bizarre as any in Clowes’ pantheon of misfits. In a 2006 interview in The New York Times, Clowes characterized the Popsies as having “some kind of distorted screwed-up anger, some post-atomic angst that got blunted over the years, like the artist was trying his best to be cute, but underneath something crawls out that’s inappropriate and angry and truthful in some way.”

A book signing presented in partnership with The Booksmith follows the conversation. Selected works will be available for sale. Items to be signed are limited to two per person.