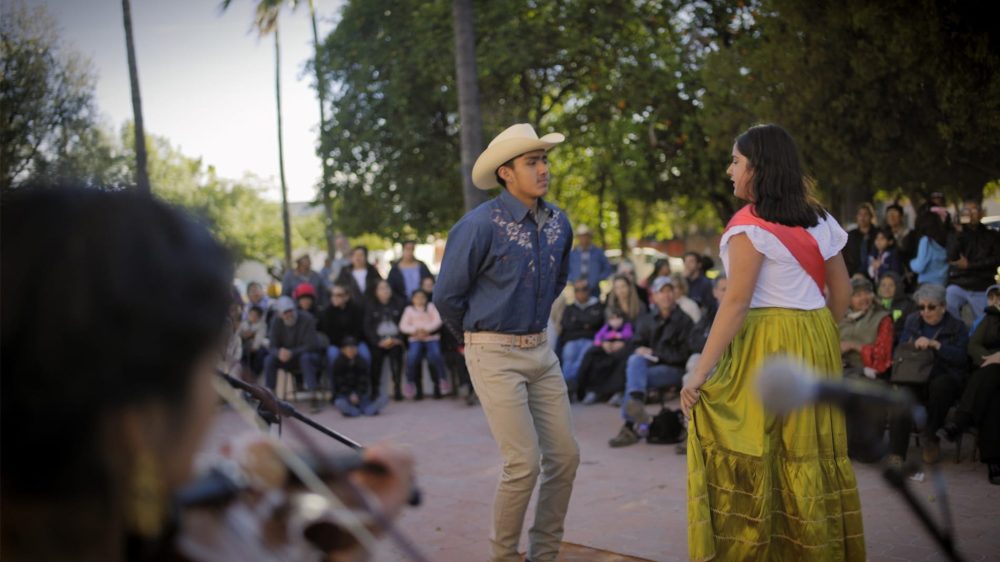 This program is an in-person screening at the Roxie Theater. Face coverings are required for entry and capacity is limited. Visit roxie.com for more details.

Exhibition: Next to You
Music: Ellen Reid SOUNDWALK
Film/Video: The Mirror

Linda and The Mockingbirds pairs acclaimed musician Linda Ronstadt with Los Cenzontles (“mockingbirds” in the Nahuatl language), a band and music academy for young people in the San Francisco Bay Area. In this documentary by award-winning director and producer James Keach, Ronstadt, musician Jackson Browne, and a busload of Cenzontles journey to the little town of Banámichi in Sonora, Mexico, where Ronstadt’s grandfather was born.

The film details Ronstadt’s long friendship with Eugene Rodriguez, a third-generation Mexican-American and musician who founded Los Cenzontles thirty years prior to reconnect working-class kids with the dignity and beauty of their ancestral music and culture. Along the way, the pounding feet of zapateado dancers, the strumming of jarana and guitar, the clacking buzz of the quijada, a donkey jawbone, and a chorus of soulful voices celebrate pride and self-knowledge with a solid, rootsy groove. “This is not Latin-ish ‘Dorito music,’ Ronstadt says of the film’s musical backbone. ‘This is Mexican music.’ “

Linda and the Mockingbirds is a song-soaked, foot-stomping trip straight to the heart of what it means to be Mexican—and American—and the complex joy of being both at the same time. Preceding the film is Good Morning Aztlan, a short film by Les Blank and Maureen Gosling featuring Los Cenzontles and Los Lobos performing Los Lobos’ 2002 song of the same name.

This screening of Linda and the Mockingbirds is co-produced by Los Cenzontles Cultural Arts Academy, McEvoy Foundation for the Arts and the Roxie Theater in conjunction with the exhibition Next to You at McEvoy Arts.