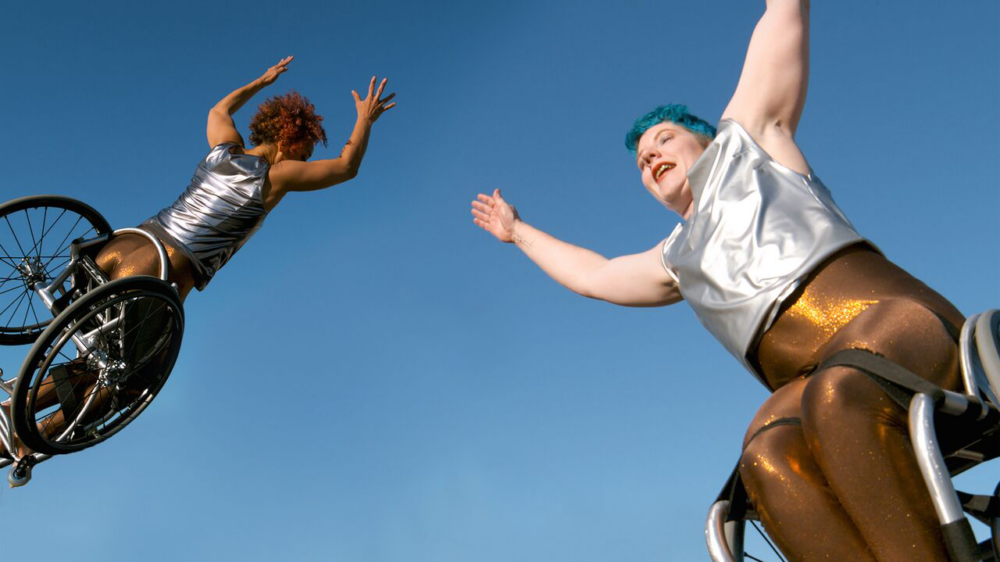 Katherine Helen Fisher, Revel In Your Body (still), 2019. Photo by Safety Third Productions, Shimmy Boyle. Image description: Alice Sheppard and Laurel Lawson fly through a cloudless blue sky with arms outstretched and their wheelchair wheels spinning. You don’t see the ground, only sky. Alice is a coffee skinned multiracial Black woman with curly hair, and Laurel is a pale white woman with short teal hair. They both wear metallic silver and gold, and Laurel has a wide, peaceful smile.

All films are screened with open captioning and audio descriptions. Assisted listening devices are available at The Roxie Theater. Introductions and discussions are offered with American Sign Language (ASL) interpretation. If you require assistance on the day of the event, please contact detourdance@gmail.com with advance notice for accommodation.

We Belong presents a selection of international short dance films that revel in the joy, eccentricity, and variety of human connection. Organized with a sensitivity to accessibility and inclusivity, this cross-genre lineup features Bharatanatyam, hip hop, and contemporary dance. Subjects range from Black trans femme love to the Chinese diaspora to the irreverence of office furniture—each offering a refreshing alternative to dominant narratives.

The act of connecting was vastly redefined during the pandemic as we withdrew from public spaces and into distant and virtual ones. This program marks the significance of gathering together once again and highlights the integral role that the arts play in society, culture, and politics.

Terrence Paschal opens the program with a solo dance performance that embodies the Kitsune (fox) from Japanese mythology and its symbolism of the conscious and unconscious in human expression. Following the screening, Eric Garcia moderates a filmmaker Q&A with Jody Stillwater (The Wind Telephone). We Belong is curated by Kat Gorospe Cole and Eric Garcia, founders of the Tiny Dance Film Festival, a San Francisco-based festival that prioritizes films that embrace brevity, embody the concept of dance with the camera, and amplify marginalized voices.

We Belong is a co-production of the Tiny Dance Film Festival and McEvoy Arts in conjunction with the exhibition Next to You. Audio description provided by Gravity Access Services. Captioning provided by StormMiguel Florez. ASL interpretation courtesy of Pilar Marsh. DCP creation by Cinematiq.