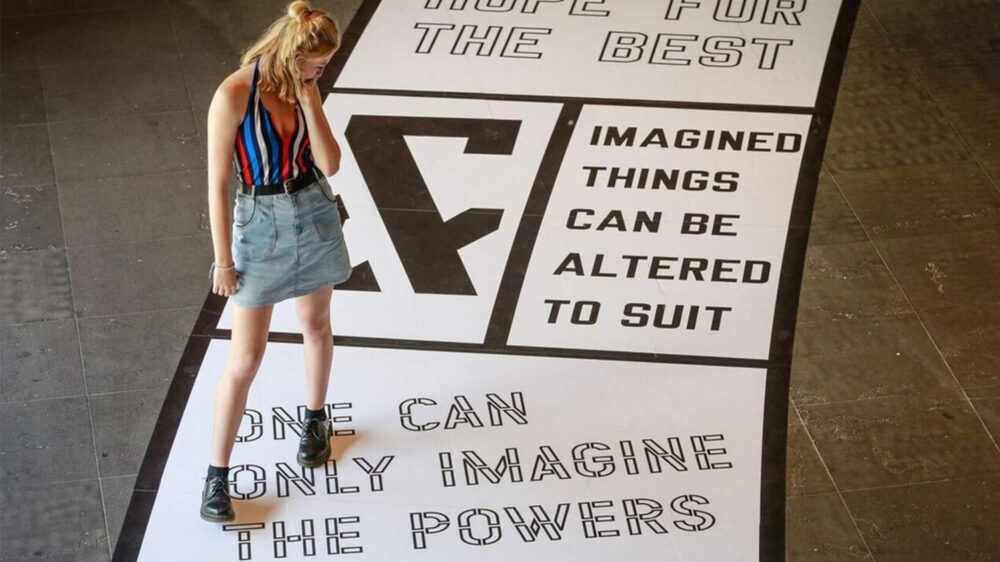 Installation view, Lawrence Weiner: OUT OF SIGHT at the National Gallery of Victoria, Melbourne. Courtesy of the artist, © Lawrence Weiner. Photo: Wayne Taylor. OUT OF SIGHT is a project of See The Vision, Grab The Vision, a 501(c)(3) dedicated to producing innovative public art and programming designed to engage, inspire, and empower youth and participants of all ages

Exhibition: Next to You
Screening Room: Hearing Aids
Film/Video: We Belong

Lawrence Weiner: OUT OF SIGHT is an interactive, public art installation that encourages community connection through the visual and performing arts. Presented in San Francisco by the Fort Mason Center for Arts & Culture (FMCAC) in partnership with McEvoy Arts and the Exploratorium, the artist’s suite of three medallions, or “marelles,” (French for hopscotch) are on view at various venues from September 2021 through January 2022. The installation at 1275 Minnesota Street (October 16, 2021 – January 22, 2022) is organized by McEvoy Arts in conjunction with the exhibition Next to You and made possible with support from the Minnesota Street Project.

Known for text-based works that recall visual poetry, literary aphorisms, or Zen koans, American conceptual artist Lawrence Weiner frequently transforms gallery walls into artistic messaging boards. In his ground-based mural OUT OF SIGHT, he creates a pathway to be viewed and navigated, both physically and intellectually. OUT OF SIGHT combines wit and whimsy in a game-like format, encouraging learning and self-actualization from the viewer through the use of graphical phrases embedded throughout the work. By being able to stand, walk, or jump from one position to the next, OUT OF SIGHT taps into the dynamic “gamification” of learning and self-discovery. The viewer navigates the creation as they see fit—interpreting the work while interacting with it.

The San Francisco edition of OUT OF SIGHT features a new color suite of marelles in English, Mandarin Chinese, and Spanish languages and an engagement guide for families with young children created by the San Francisco Children’s Art Center.

Like Next to You, OUT OF SIGHT celebrates the potential within all of us to connect with ourselves and with each other in a process of shared exploration. Visitors can discover the nearby exhibition of artworks from the McEvoy Family Collection that revel in the joy, vitality, and healing power of the performing arts after a year of isolation. Admission to both the installation and exhibition is free.

Lawrence Weiner: OUT OF SIGHT is presented in San Francisco by Fort Mason Center for Arts & Culture in partnership with McEvoy Foundation for the Arts and the Exploratorium. The presentation at 1275 Minnesota Street, San Francisco, is possible through the support of Minnesota Street Project.

Concurrent with OUT OF SIGHT at FMCAC, two new commissions will debut the same day: Wat Walls, a painting suite by East Bay muralist Thitiwat Phromratanapongse; and Kindred Swell, a site-specific dance by San Francisco-based choreographer and dancer Kim Ip. And in partnership with BOXBLUR and Immersive Arts Alliance, FMCAC will serve as a key viewing station for Shimon Attie’s Night Watch, a floating visual art installation passing through the San Francisco Bay featuring images of political asylum refugees projected onto a giant LED screen.