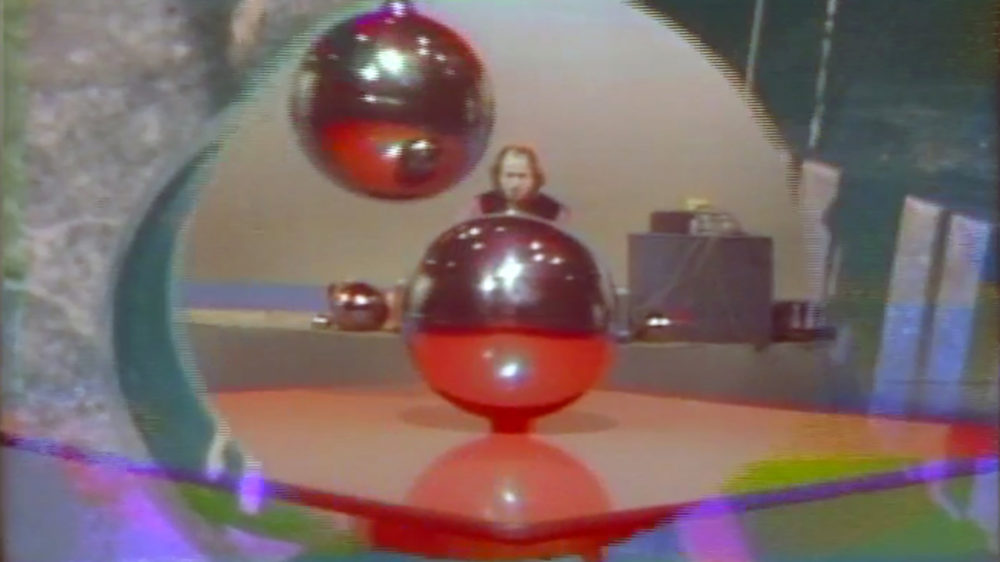 It’s my third visit in as many days to McEvoy Foundation for the Arts’ screening room in San Francisco, and I’m fully captivated by what it’s showing — a presentation of early experimental video, complete with primitive chroma keying, digital colorization, and strange performance documentation.

During my stay, several people linger in the room and shuffle out a few moments later: arty-looking students, confused teenagers, older visitors with anecdotal commentary. I am clearly the only one watching the seven-and-a-half-hour program in its entirety. But here’s why I shouldn’t be.

Organized by Steve Seid, former film and video curator at Berkeley’s Pacific Film Archive, WHEN THE MEDIUM WASN’T: San Francisco’s Dilexi Series, is a collection of rarely seen moving picture works by some of the late 1960s art world heavy hitters. The series showcases 12 pieces initially produced for television broadcast in 1969 that have only been seen a handful of times since. Helpfully, the program screens daily on a timed schedule. So if you want to catch a particular work, you know exactly when it will be shown.

The Dilexi Series was originally conceived by gallerist Jim Newman, owner of San Francisco’s famed Dilexi Gallery, which showed works by Jay DeFeo, Roy De Forest, Manuel Neri, and other local luminaries. In the late 1960s, towards the end of the gallery’s existence, Newman became less interested in the operations of a brick-and-mortar and began to focus on television as a means to produce and exhibit artwork to a wider audience.

“Some was boring, some was stimulating, and some was something else.” —  Jim Newman

Teaming up with producer John Coney of KQED’s Experimental TV Project (later known as the National Center for Experiments in Television), Newman set out to show experimental artworks on KQED Channel-9, effectively offering arts programming to every home television in the Bay Area.

With the exception of Warhol’s Paul Swan, a candid portrait of an aging eccentric actor, and Zappa’s Burnt Weeny Sandwich, a trippy, chaotic, early attempt at a music video, all works in the Dilexi Series were new commissions by artists with little to no experience with video and film production.

Airing weekly on public television in an evening spot, a viewer looking to watch The Beverly Hillbillies or Bewitched as they unwound from a long day might accidentally stumble upon an artwork specifically designed to deliver an anti-television experience. As Newman described the work to me in a recent interview, “Some was boring, some was stimulating, and some was something else.”

A new kind of television

The Dilexi Series was situated within a larger cultural movement to democratize television, create access to a wide range of ideas and perspectives, and increase the ways in which citizens could engage with the medium. With the advent of any new medium, intellectuals, philosophers, activists, and artists naturally dream about it in utopic terms. Seid’s title for the McEvoy program is a direct nod to media theorist Marshall McLuhan’s phrase “the medium is the message.” For McLuhan and others, the vehicle through which information is disseminated is equally as impactful as the information itself.

While film and video art had previously worked hard to differentiate themselves from the presumably lower form of television, there were a number of confluent events in the late 1960s that actively encouraged the merging of these platforms. 1967 marked the introduction of the Sony Portapak to the market, a self-contained analog video system with instant playback capability. While originally intended for home use, it became popular with artist groups like Top Value Television, Ant Farm, and the Videofreex – who went out into the world to record and broadcast alternative news coverage, countercultural movements, and leftist viewpoints.

Also in 1967, the Public Broadcasting Act created the Corporation for Public Broadcasting (CPB) whose purpose was to support the development of non-commercial public television and radio programming through the use of federal funds. Most notably, the CPB created the Public Broadcasting Service (PBS), a non-profit public television network that would acquire and produce programs for distribution among local television channels across the country. Federal funding meant it was challenging for PBS to create provocative and alternative programming. Often what aired was fairly neutral or family friendly content, like Sesame Street or The French Chef with Julia Child.

Even though they were located within the environment of a public television station, The Experimental TV Project, and the Dilexi Series by association, ran on private funding from the Rockefeller family and money raised by Newman. Without the constraints and complications that come with government dollars, a unique situation arose where artists could create whatever content they wanted for what was essentially a public space. Allowing the artists to have total creative control, Newman and Coney did not impose any restrictions in terms of length, form, or content in the creation of the work.

While their activist counterparts like the Videofreex focused on broadcasting as means to democratize television production, the artists of the Dilexi Series were more interested in how newly accessible film and video equipment could be used in service of their own art practices. Working across disciplines as diverse as visual art, music, theater, land art, and dance, the artists were encouraged to see what they could do with access to studio space and equipment. Seid described many of the works as having a “spontaneous quality with an improvisational relationship to the hardware, manipulated by artists in a manner similar to jazz.”

This is certainly true in Music with Balls, a spacey collaboration between sculptor Arlo Acton and musician Terry Riley. In the work, a montage of swinging reflective spheres combines with footage of Riley playing hypnotic nonlinear tape loops and soprano saxophone from his seminal album A Rainbow in Curved Air. It’s as if a Newton’s Cradle swung into celestial orbit.

Equally as psychedelic and experimental is Phil Makana’s The Empire of Things, whose narrator describes an inventory of riches ripe for the taking in what the imagery suggests is a postwar scenario. Using a combination of found and original 16mm film reels, Makana manipulated the imagery during the process of transferring it to video, creating interesting color effects and image overlays.

Rainer filmed the staging of a large-scale work incorporating everyday gestures along with a rare solo performance and a monologue rant about snot.

Other works in the Dilexi Series offer glimpses into the process of artistic production through a more documentary approach. Right On (Ceremony of Us), records the rehearsal for a subsequent performance by Anna Halprin’s San Francisco Dancers’ Workshop and the Studio Watts Workshop from Los Angeles (all-white and all-black dance companies, respectively). In the piece, created in response to the Watts riots, Halprin guides the dancers through a series of movements and extensive partner work. The performance sought to explore racial politics while providing opportunities for catharsis and healing.

In Rites of Guerrilla Theater by Julian Beck with Judith Malina, we see documentation of The Living Theater company instructing its audience to participate in an anarchic “orientation” at Mills College by screaming out five phrases that demonstrate the prohibitory, restrictive nature of society. The actors and students take turns yelling “I am not allowed to smoke marijuana” and “I don’t know how to stop the war.”

Also created at Mills is Yvonne Rainer’s Dance Fractions for the West Coast. Enlisting the participation of 30 students, Rainer filmed the staging of a large-scale work incorporating everyday gestures along with a rare solo performance and a monologue rant about snot. Some rudimentary post-production work integrates colorization, frame splitting and dual exposures into the piece, bringing the straightforward documentation into a more experimental realm.

It’s rumored Rainer disavows this work from her lexicon due to having ambitions for the video she was unable to realize. But her work and other pieces in the Dilexi Series serve as unusual documents, offering valuable insight into these artists’ more established products, and an overall sense of the aesthetic concerns of the time.

The novelty and rarity of the series contribute to the excitement of having access to it now. According to Seid, the original tapes were kept by Newman in his home for decades, lending them only once for transfer in the early 1980s to the San Francisco International Video Festival. In the 1990s, Newman gifted the tapes permanently to the Pacific Film Archive, where Seid had them preserved. Seid continued to champion this work, showing it sporadically during his time at BAMPFA, both in its entirety and a few videos at a time.

There is little evidence to show what the general public thought of the Dilexi Series at the time it aired, so we can only speculate on the program’s impact. One could argue that any art placed in the public realm offers access to ideas, experiences and viewpoints to all people equally and for free, an offering that’s essential to the health of our society. And as each new medium arises, the effort to ensure public access to it continues. This presentation of the Dilexi Series reminds us of the importance of accessing art in everyday life, and how asserting that importance can be a necessary and radical act.

‘WHEN THE MEDIUM WASN’T: San Francisco’s Dilexi Series’ in on view at the McEvoy Foundation for the Arts through May 5. A panel discussion with curator Steve Seid, Dilexi artists Anna Halprin and Philip Makanna, and former Dilexi Gallery owner Jim Newman takes place April 12, 6:30–8:30pm. For the daily schedule and more information, click here.

Correction: The article originally stated that KQED threw out the Dilexi Series tapes.