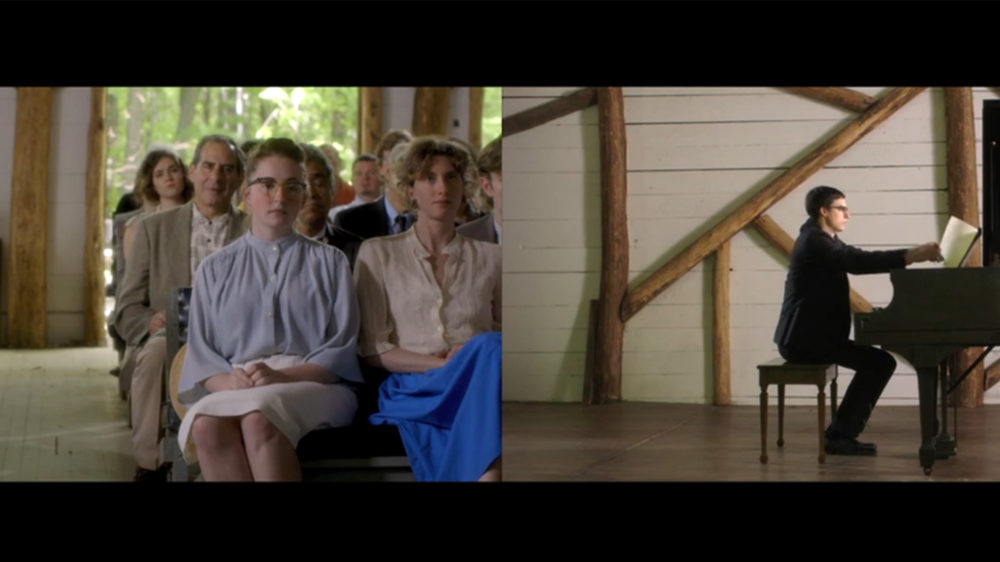 Exhibition: What is an edition, anyway?
Screening Room: Alison O’Daniel: The Tuba Thieves

Opening May 24, at the McEvoy Foundation for the Arts, Alison O’Daniel: The Tuba Thieves presents a selection of video work by the Los Angeles-based artist that explores acts of listening and producing sound. The half-hour program is guest organized by San Francisco-based curator Tanya Zimbardo in conjunction with McEvoy Arts’ summer exhibition, What is an edition, anyway? and screens daily during regular gallery hours through September 7. McEvoy Arts hosts Zimbardo and O’Daniel in for a free, public artist talk on Sunday, July 21.

The Tuba Thieves (2013–ongoing) is both a feature-length film in progress that O’Daniel has been shooting and an expanding project of mixed-media installations, sculptures, and performances. The program highlights two scenes that reimagine legendary concerts: the 1952 premiere of John Cage’s 4’33” performed by David Tudor in Woodstock, New York, and a 1979 punk show and closing party for the Deaf Club hosted by Bruce Conner in San Francisco. The poetic captioning in the third fictionalized narrative, Scene 55: The Plants Are Protected (2013), foregrounds her collaborative process of commissioning the deaf artist Christine Sun Kim to develop the soundtrack.

O’Daniel collaborates with hearing, Hard of Hearing and Deaf composers, musicians, performers, and athletes in order to highlight the loss or re-creation of information as it passes through various channels. The Tuba Thieves took its point of departure from a crime wave in 2011 of tuba robberies from several Los Angeles high school marching bands. O’Daniel saw the loss of these tonally-rich instruments as analogous to her experiences with being hard of hearing—missing and filling in the gaps of conversations.

Zimbardo took inspiration for the program of editioned video artworks from the section of What is an edition, anyway? devoted to a selected history of music recordings and album covers. Cage and Conner, whose practices intersected musical and visual arts communities, are both touchstones in the exhibition. The Tuba Thieves in this context additionally offers an expanded idea of the copy through reenactment and the release of each film scene.

Alison O’Daniel is a visual artist and filmmaker working across sound, narrative, sculpture, installation and performance. Her work has screened and exhibited in galleries and museums internationally, including the Hammer Museum, Los Angeles; Garage Museum of Contemporary Art, Moscow; Centre Pompidou, Paris, FR; Centro Centro, Madrid, Spain; Renaissance Society, Chicago; and Centre d’art Contemporain Passerelle, Brest, France. Her film, The Tuba Thieves, has received support from Ford Foundation JustFilms; Creative Capital; Sundance; IFP; Points North; Field of Vision; and Chicken and Egg. She is a recipient of the SFFILM Rainin Grant for Filmmakers with Disabilities, a 2019 Louis Comfort Tiffany award and has received grants from Art Matters; the Rema Hort Mann Foundation; Center for Cultural Innovation; the California Community Foundation; and Franklin Furnace Fund. She was included in Filmmaker Magazine’s 25 New Faces of Independent Film and writing on O’Daniel’s work has appeared in The New York Times Magazine; Artforum; The Los Angeles Times; BOMB; and ArtReview. She is represented by Commonwealth and Council in Los Angeles and is an Assistant Professor of Film at California College of the Arts in San Francisco, CA. She lives and works in Los Angeles, CA.

Tanya Zimbardo is a San Francisco-based curator. As the assistant curator of media arts at the San Francisco Museum of Modern Art, she has curated solo exhibitions of work by Pat O’Neill, Jim Campbell, Kerry Tribe, Runa Islam, and co-curated Nothing Stable under Heaven and Soundtracks, among others. Zimbardo has guest curated projects at Bay Area nonprofit arts organizations including the 500 Capp Street Foundation, di Rosa Center for Contemporary Art, Mills College Art Museum, and San Francisco Cinematheque. Zimbardo has contributed to publications such as Voices in Contemporary Art (VoCA) Journal and INCITE: Journal of Experimental Media.