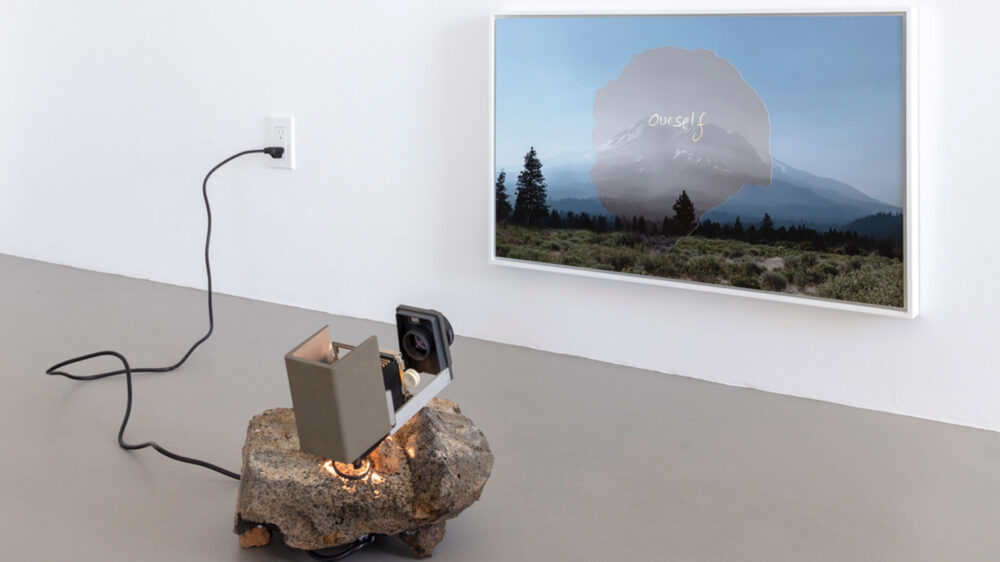 Make a reservation to visit the exhibition in person here.

McEvoy Arts: Can you share a bit about your practice and background?

Richard T. Walker: I grew up in Shropshire, England. In 2007, I moved from London to San Francisco. I had been making work that meditated on the legacy of the American West from a British perspective. Once I was located on the West Coast, I had first-hand access to the vast open spaces I had read about and seen on film. Being in the presence of these expanses conjured very visceral, emotional sensations. I was fascinated by the relationship these feelings held with the cultural phenomena of the American West that had been so successfully exported to the UK. But these feelings went further, they were complex and confusing. I could sometimes quantify them intellectually by relating them to myths of Hollywood and Romanticism, but their reach stretched into things that felt like ineffable reconfigurations of reality and questioned the mechanics of perception.

I realized that the space of landscape is a platform to interrogate facets of the human condition, for it exposes the figure, the body and the interiority of being. This space pulls it all apart and allows a moment to see the constituent elements for what they are before they glue back together again. It is this juncture, this fulcrum, that continues to be a focus in my practice.

“The notion of solitude in my work feels more enhanced. Expanses seem more expansive, everything seems turned up and tuned in a little more.”

McEvoy Arts: As an artist in The Minnesota Street Project Studio Program at 1240 Minnesota Street, the building’s temporary closure has forced you to embrace new working accommodations. How have you coped with the isolation of social distancing and uncertainty?

RW: At first I wasn’t really coping in terms of art-making. The world suddenly spun much faster and it was hard to keep balance. The ability to zone in, to focus, to look and think about something in a way that allows an idea to unfold and reveal itself wasn’t there anymore. Perhaps this was because everything was unfolding or unwinding, so the notion of picking something apart felt like the inverse of what was desired. The questions one asks in their studio about the characteristic of this or the significance of that seemed insufficient and also less relevant. This said, the undoing of normal life outside the studio is bizarrely reflected in the intentional dismantling of something in the studio. I think I need to embrace this parallel.

McEvoy Arts: Has the onset of the pandemic and the resurgence of the Black Lives Matter movement offered you new insights into preexisting bodies of work or motivation for new projects?

RW: Making my work is a solitary activity. I go into landscapes by myself and report on my findings through visual means. As a straight white man, I can feel somewhat safe going into the depths of rural California, which is a privilege not afforded to everyone. This is something I have considered before, but it now feels more pronounced within the work, as does the problematic associations with wilderness and the politics of landscape. The notion of solitude in my work feels more enhanced. Expanses seem more expansive, everything seems turned up and tuned in a little more. Perhaps it is in reflection to the domestic spaces that we have been inhabiting so intensely.  The city has shifted away from being a city and has become a coarse collection of buildings, roads, cars and people. Nature, on the other hand, still maintains its position. The only change to nature is that it has new emphasis: it is even more of a respite, even more a refuge.

McEvoy Arts: How does your work on view in In This Light engage with the notion of resilience? When, where, and how was your work produced?

RW: The disparate particles of light emanating from the slide projector bulb are forced to coalesce through the gaps in a slide that projects the word “ourself” onto an image of Mount Shasta. The image is made up of two collaged photographs: one color, one black and white. Combined, these elements form a gesture of togetherness, of overcoming separation and the trappings of singularity. But also, and importantly, they instill a reflection of the aggregate power of words and language to form meaning and action – a collective symbiotic confluence of gestures. The work was produced in 2019, but in light of the current situation, the ideas within it seem to garner new and expanded relevance.

McEvoy Arts: Do you have any suggestions for artists wrestling with making work amidst collective anxiety and uncertainty?

RT: For me, the following has helped: “Keep it open, allow fluidity and repetition. Direct it outward and then inward, not inward then outward. Find meaning in the search for meaning. Find resolution in the questions and give less weight to the answers. Act like it matters less than you know it does.”

McEvoy Arts: What’s been most striking to you about the impact this moment is having on the making, presentation, and consumption of culture?

RW: With two small children, I don’t consume as much culture as I’d like, so this is a tricky one to answer, and honestly think it may be too soon to make an assessment. However, I know that people are fed up with Zoom and fed up with looking at everything online, and so I think the importance of witnessing and consuming culture in the real world has become more apparent than ever. Will this change things when we enter back into the world of physical art spaces, theatres, and galleries? I’m not sure. One thing I hope is that museums restrict taking photos in the galleries and that more emphasis is spent on encouraging visitors to share moments with the work, unmediated.

McEvoy Arts: What are your hopes for the future?

RW: That social distancing goes back to being optional. That Trump loses. That we collectively feel the tangible urgency of saving our planet. That we reopen our borders to those in need. That resolving social inequality and racial injustice is prioritized in all communities and that we have free national healthcare ASAP. Also, I hope the future provides a substantial and significant increase in government funding for the arts.

McEvoy Arts: What is the responsibility of the artist in times like these?

RW: Each artist has their own role that is personal to them. For me, I see the work I put into the world as being a way to communicate something universal, even if what is being communicated are the challenges inherent in communication. In acknowledging the limitations and the fallibility of the individual, I want to produce art that brings people together in collective experience. To the best of my ability I would like to make work that prioritizes experiences that reflect on the nature of experience itself. I want to produce work with multiple entry points that emphasizes the universality of being human, of having consciousness, of feeling, having emotions, of existing. And how the power of the visual enables us to share and communicate who and what we are.

McEvoy Arts: Has your sense of the role of art in society shifted?

RW: My wife Blaine Bookey is an attorney battling the current Republican administration for the rights of asylum seekers and refugees. Her daily job is directly helping people in desperate circumstances. In relation to this, the various decisions and deliberations that occur in my studio seem somewhat indulgent. It’s something I have often thought about, but now it feels particularly acute. However, in defiance of the question mark that looms large I keep going to the studio and I keep making work. I can’t articulate it in a way that feels satisfactory, but my own actions tell me that art still has a role. How that role has changed is something that continues to unfold. What is clear is that the role of art should be one that is broad, inclusive and doesn’t rely so heavily on wealth and the economically privileged. The elitism of the art world has always been problematic and now it feels especially so.

McEvoy Arts: Lastly, is there a piece of art, literature, film, or music that has been a comforting touchstone for you through the pandemic?

RW: Eluvium’s Pianoworks has provided a needed center of late, when all else has appeared to be drifting endlessly outward.

Richard T. Walker employs a variety of media including video, music, photography, sculpture and performance. These media are often intermixed to explore and question the experience of the individual within the natural landscape. His work is in the collections of the San Francisco Museum of Modern Art, Kadist Foundation, and the Kunstsammlung Nordrhein-Westfalen (K21), amongst other institutions. He has exhibited and performed worldwide including at The Contemporary Austin; Hiroshima City Museum of Contemporary Art; The Museum of Modern Art, Rio de Janeiro; The Times Museum, Guangzhou, China; the Witte De With Center for Contemporary Art, Rotterdam; and Yerba Buena Center for the Arts, San Francisco. Walker has been an Irvine Fellow at the Montalvo Art Center as well as participated in residencies at Headlands Center for the Arts and Skowhegan School of Painting and Sculpture. He received an Artadia Award in 2009. He received his MA from Goldsmiths College and lives in San Francisco.