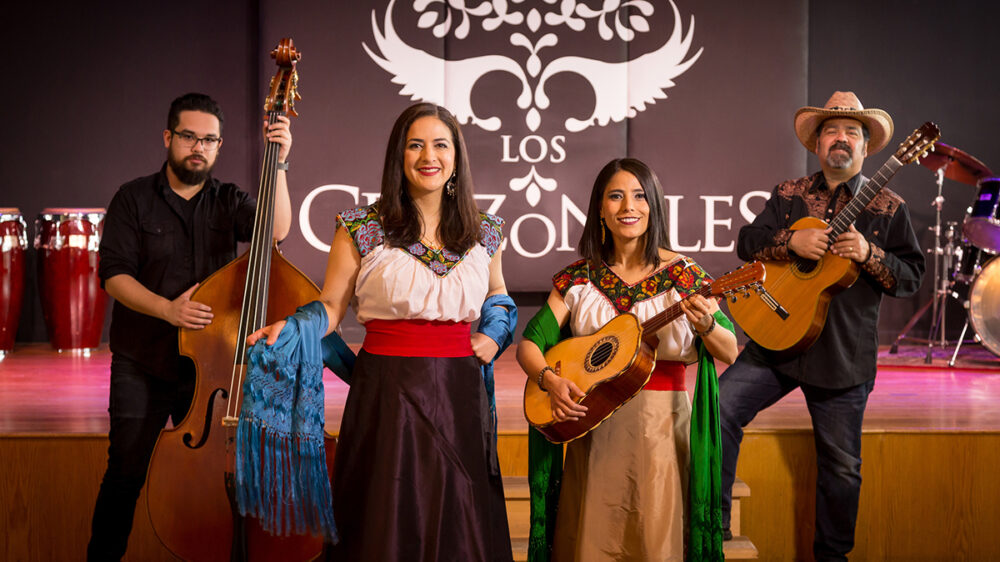 Music: Celebrando la Cultura: Los Cenzontles in Watsonville
Exhibition: Next to You
Film/Video: Linda and the Mockingbirds

McEvoy Foundation for the Arts, Los Cenzontles Cultural Arts Academy and the Watsonville Film Festival celebrate Mexican Independence Day and the region’s community of essential farmworkers with Celebrando la Cultura, a free outdoor concert in Watsonville City Plaza on Friday, September 17 at 6pm. The concert features performances by Los Cenzontles and other Mexican American cultural organizations. Celebrando la Cultura is organized in conjunction with Next To You an exhibition of artworks from the McEvoy Family Collection that encourages community connection through visual and performing arts. A virtual showcase of Los Cenzontles’ films, including a screening of the award-winning documentary Linda and the Mockingbirds, is available from September 15 through 18 via the Watsonville Film Festival.

Celebrando la Cultura celebrates the creative impact of Mexican American music and dance on the region’s performing arts traditions, as well as the essential labor of agricultural workers in the Pajaro Valley. The concert coincides with the weekly Watsonville farmers market and features traditional folk music and dance performances by Los Cenzontles, Los Originarios del Plan (presenting Tierra Caliente and Arpa Grande music), and the Watsonville-based Estrellas de Esperanza youth folkloric group. Additional support is provided by the City of Watsonville and the Watsonville Campesino Appreciation Caravan, a volunteer-run organization that provides assistance and support to farmworkers in Watsonville. Organizers have partnered with the nonprofit healthcare organization Salud Para La Gente to provide a mobile vaccination clinic to concert attendees.

“We are thrilled to partner with Los Cenzontles and McEvoy Arts to present this beautiful program,” says Consuelo Alba, director and co-founder of the Watsonville Film Festival. “It’s a wonderful opportunity to celebrate Mexican-American culture, honor our farmworkers for their essential work and build bridges between urban and rural communities.”

“Celebrando la Cultura and the Watsonville Film Festival program delivers the power of traditional Mexican folk music to stage and screen,” says Rodriguez. “The concert is Los Cenzontles’ first live appearance together in more than a year—we’re looking forward to sharing the dignity and beauty of this traditional music with families in Watsonville.”

Los Cenzontles is a grassroots artist-driven organization committed to amplifying the roots of Mexican culture through classes, events, media, and performances. Founded in San Pablo, CA in 1994 by musician and educator Eugene Rodriguez, Los Cenzontles provides the local community with a family-friendly setting for traditional arts education and cultural events. The Los Cenzontles Academy connects students of all ages with maestros of traditional Mexican genres instilling a sense of cultural pride and participation in living traditions. Our full calendar of events features performances by our students, our own professional touring group, Los Cenzontles, and well-known world musicians and visiting artists. Los Cenzontles documents this journey of continuing the long tradition of authentic Mexican art with CDs and DVDs to share with the world and future generations.

Estrellas de Esperanza is a youth folkloric group that has been performing throughout Santa Cruz County and beyond over the past 13 years. Estrellas members not only learn traditional dance steps, they also learn about the different regions the dances come from and their history, ultimately instilling pride of culture, language, and music in the youth. Founder and maestra, Ruby Vasquez has an extensive background having danced for Esperanza del Valle for 34 years. Because of her deep passion for traditional dance and music, Ruby often brings Maestros from Mexico to teach the youth authentic dances not often seen in the area.

McEvoy Foundation for the Arts presents exhibitions and events that engage, expand, and challenge themes present in the McEvoy Family Collection. Established in 2017, McEvoy Arts creates an open, intimate, and welcoming place for private contemplation and public discussion about art and culture. Rooted in the creative legacies of the San Francisco Bay Area, McEvoy Arts embodies a far-reaching vision of the McEvoy Family Collection’s potential to facilitate and engage conversations on the practice of contemporary art. McEvoy Arts invites artists, curators, and thinkers with varied perspectives to respond to the Collection. Each year, these collaborations produce exhibitions in the Foundation’s gallery, new media programs in the Screening Room, as well as many film, music, literary, and performing arts events each year. Exhibitions are free and open to the public. For more health, safety, and admissions information, please visit mcevoyarts.org.

The Watsonville Campesino Appreciation Caravan is a volunteer-run organization providing much-needed and much-deserved supplies, information, food, and appreciation to farmworkers in Watsonville. The group is made up of community members, educators, and students who provide crucial information about health & safety regarding COVID19 and resources that are available to them in the Watsonville community. Every penny of the funds they raise goes directly to local farmworkers and their families via https://gofund.me/877ba13a.

The City of Watsonville is located ninety-five miles south of San Francisco and has 51,000 residents. It is a rich agricultural community famous for its fresh berries, apples, and cut flowers. Watsonville, located in the lush Pajaro Valley, offers an ideal climate and the small-town charm of a rural community. Watsonville is more importantly recognized for its ethnic and cultural diversity, history of activism, generations of artists, dancers, and filmmakers. More than 80% of its population is Latino, and 31.5% of its population is under nineteen years of age.

The Watsonville Film Festival showcases Latinx filmmakers and stories that illuminate our shared humanity and inspire positive change. Founded in 2012, WFF developed from a grassroots collective into a non-profit arts organization offering year-round programming that celebrates powerful filmmaking and local creativity. WFF strives to make its programs accessible to all, leveraging the power of film to build bridges, spark conversations and imagine new possibilities in the heart of the Monterey Bay.