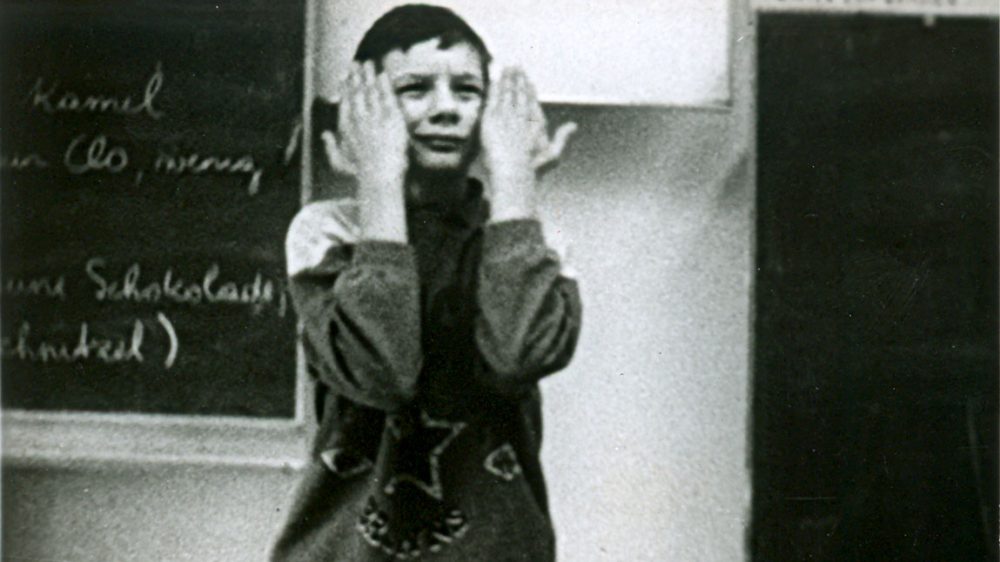 Screening Room: Hearing Aids
Exhibition: Next to You
Press Release: ‘Next to You’ Rediscovers Community Through the Performing Arts

McEvoy Foundation for the Arts is pleased to announce Hearing Aids, a program of short films and videos that consider a new sensory sensitivity to a world emerging from the coronavirus pandemic. On view in the McEvoy Arts Screening Room, and in conjunction with the exhibition Next to You, Hearing Aids addresses sound, movement, touch, and language in relation to feelings of community and isolation. It is guest curated by visual artist and filmmaker Alison O’Daniel and runs in two parts from May 28 through August 31 and September 1 through December 4, 2021.

Within her practice, O’Daniel often collaborates with hearing, Hard of Hearing, and Deaf composers, musicians, performers, and athletes in order to highlight the loss or re-creation of information as it passes through various channels. For Hearing Aids, sheexposes viewers to how sound can dictate the image, complicating our notions of how we comprehend the relationship between the aural and the visual.

Hearing Aids draws attention to a spacious view of sound not always rooted in the ear. O’Daniel, who herself is hard of hearing and wears hearing aids, cites the loss of taste and smell that is symptomatic of COVID-19 infection as a point of departure for the curation of the program. She asks whether the shared experience of these sensorial losses can usher society into a greater awareness of the body’s intricacies of communication.

“Our ability to smell and taste has been noticed because it might have been lost. It has served as a daily sensory check to make sure other symptoms of COVID are not about to follow,” says O’Daniel. “When we sit back in a movie theater, will we crave someone’s cell phone to ring, or to hear the sound of the movie in the theater next door resonating through the walls? At a concert, might we want someone to spill their drink, glass shattering, everyone turning their heads at its sonic contribution?”

Hearing Aids is divided into two sessions of short video and film works in which soundtracks, voiceovers, Foley effects, pseudo-scientific tests, conversations, hidden or forgotten mics, Sign Language, forms of surveillance, voiced instructions, and structured audio cuts all function as guides for how the body of the subject or the viewer moves through the work. Spanning the 1970s to the 2010s, films by John Smith, Daria Martin, Kathrin Resetarits, Sky Hopinka, Abigail Child, Deborah Stratman, and Jenny Brady, among others, are included in the program.

The six short films in Session 1 include Jill Magid’s Trust (2004), in which the artist allows herself to be guided with her eyes closed through the streets of Liverpool, England by the police on duty, who observe her location through their monitoring of the country’s largest CCTV surveillance system. Suné Woods’ We was just talking (2017) uses constructed and found footage to explore a tactile and sensorial terrain within intimate relationships and those to the natural world while Laida Lertxundi’s Vivir para Vivir / Live to Live (2015) explores the sensations of being lost and of reaching the horizon. Sweeping views of sparsely populated mountain regions are interspersed with sensory moments like heartbeats, sound, and color patterns to probe differences between represented and embodied experiences. Together, these films construct a web of intimate connections between touch and listening, acts of following and guidance, and the seen and unseen to pose questions about accessibility and inaccessibility.

Hearing Aids: Session 1 screens daily at McEvoy Arts from May 28 through August 31, 2021. Session 2 debuts September 1 and runs through December 4, 2021. Admission is free and open to the public. O’Daniel also curates a feature-length film screening in partnership with San Francisco’s Roxie Theater, dates to be announced. Hearing Aids is the second collaboration between O’Daniel and McEvoy Arts. In 2019 McEvoy Arts presented selections from The Tuba Thieves (2013—), guest curated by Tanya Zimbardo, assistant curator of media arts at SFMOMA.

Alison O’Daniel is a visual artist and filmmaker working across sound, narrative, sculpture, installation and performance. Her work has screened and exhibited in galleries and museums internationally, including the Hammer Museum, Los Angeles; Garage Museum of Contemporary Art, Moscow; Centre Pompidou, Paris, FR; Centro Centro, Madrid, Spain; Renaissance Society, Chicago; and Centre d’art Contemporain Passerelle, Brest, France. Her film, The Tuba Thieves, has received support from Ford Foundation JustFilms; Creative Capital; Sundance; IFP; Points North; Field of Vision; and Chicken and Egg. She is a recipient of the SFFILM Rainin Grant for Filmmakers with Disabilities, a 2019 Louis Comfort Tiffany award and has received grants from Art Matters; the Rema Hort Mann Foundation; Center for Cultural Innovation; the California Community Foundation; and Franklin Furnace Fund. She was included in Filmmaker Magazine’s 25 New Faces of Independent Film and writing on O’Daniel’s work has appeared in The New York Times Magazine; Artforum; The Los Angeles Times; BOMB; and ArtReview. She is represented by Commonwealth and Council in Los Angeles and is an Assistant Professor of Film at California College of the Arts in San Francisco, CA. She lives and works in Los Angeles, CA.

Next to You is an exhibition of modern and contemporary artworks from the McEvoy Family Collection that celebrate the joy, vitality, and healing power of the performing arts. As the world emerges from the coronavirus pandemic and its requisite isolation, Next to You is a farewell ballad to a strange and challenging time and a look forward to a future where we are reunited. Featured artists include Mamma Andersson, Ilse Bing, Francis Cape, Sid Grossman, Michelangelo Lovelace, Lisette Model, Irving Penn, Thomas Ruff, Dennis Stock, George Silk, Malick Sidibé, Hiroshi Sugimoto, Lava Thomas, and Sabine Weiss, among others. With the performing arts cultural sector largely inaccessible during the pandemic, the exhibition showcases dance, theater, music, circus arts, film, and other creative forms. Next to You includes a series of virtual and live events with several dynamic partnering organizations to be announced in Spring 2021.

About McEvoy Foundation for the Arts
McEvoy Foundation for the Arts presents exhibitions and events that engage, expand, and challenge themes present in the McEvoy Family Collection. Established in 2017, McEvoy Arts creates an open, intimate, and welcoming place for private contemplation and public discussion about art and culture. Rooted in the creative legacies of the San Francisco Bay Area, McEvoy Arts embodies a far-reaching vision of the McEvoy Family Collection’s potential to facilitate and engage conversations on the practice of contemporary art. McEvoy Arts invites artists, curators, and thinkers with varied perspectives to respond to the Collection. Each year, these collaborations produce exhibitions in the Foundation’s gallery, new media programs in the Screening Room, as well as many film, music, literary, and performing arts events each year. Exhibitions are free and open to the public.

Visit
McEvoy Arts is dedicated to providing a safe environment for all by following guidelines from the Centers for Disease Control, the state of California, and the city and county of San Francisco. Admission is free by timed-entry reservation or with a walk-up reservation (limited quantities available). For more information, please visit mcevoyarts.org/visit.