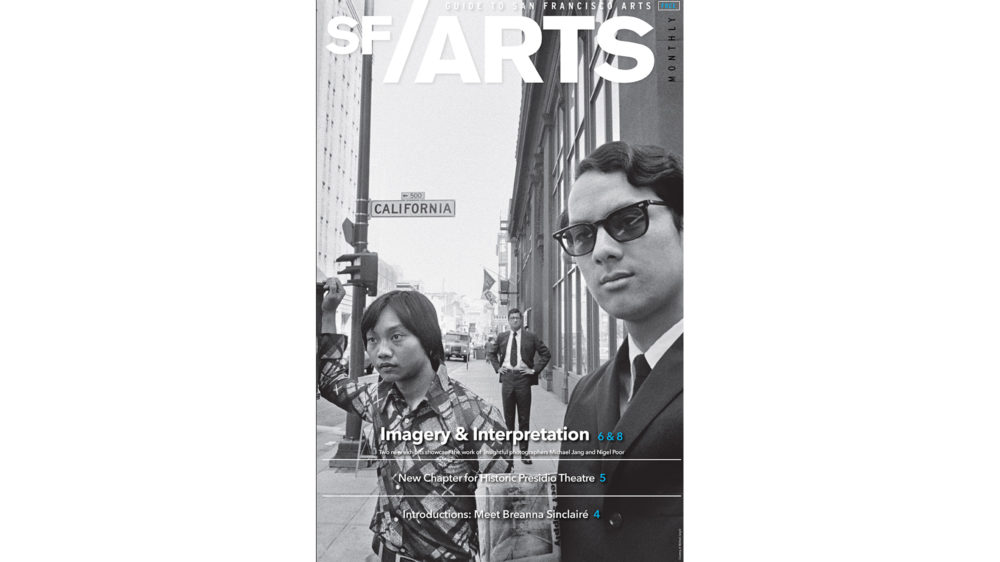 Looking too cool for school in a black suit and shades, Michael Jang, an aspiring photographer in his early twenties, stood on a corner in San Francisco’s Financial District in 1973 and shot a self-portrait. Inspired by a book of Lee Friedlander’s self-portraits, Jang took the “selfie” with a Leica camera in his hand and a 21mm wide angle lens that makes it appear as though the photograph was taken from several feet away. A curious security guard from a Wells Fargo Bank, who’s seen hovering in the background, had been following him. ”I was probably a bit suspicious-looking walking around taking pictures of myself, back then,” recalls Jang. “He actually showed up on several rolls of film. It was hilarious.” Over the next forty years, Jang built a successful commercial portrait practice with famous clients such as Jimi Hendrix and Robin Williams. Meanwhile, tucked away in a pile of boxes at his home in San Francisco was a stash of personal photographs he had been taking on the side; he didn’t unpack them until 2001. They included playful images of members of his extended Chinese American family and his college days at CAL Arts in L.A. and SFAI; pictures of punk bands and wannabe television weathercasters as well as an impromptu photograph of author William Burroughs that Jang snagged when he crashed a poetry event. Some 100 works from this cache, mostly from the 1970s and 80s, form the basis of the artist’s first retrospective exhibition. Michael Jang’s California, which opens this month at McEvoy Foundation for the Arts, focuses primarily on his early adventures in the medium, and his street photography. Photographs by Diane Arbus, Lee Friedlander and Garry Winogrand, whom Jang cites as seminal influences, are also in the show.

“He was a born photographer, an almost a fully formed creative being right from the start,” says Sandra Phillips, curator emerita of photography at SFMOMA, which acquired thirty of Jang’s nascent images for their permanent collection.

Though he can be serious, as he was in a solemn scene from 1978 in which Harvey Milk is being wheeled out of City Hall in a body bag, his works are often funny and filled with pleasure. One can sense the humor and joy in “The Jangs,” a grouping of candid snapshots of his family, variously dressing up as Santa, skiing indoors, having tea or casually sitting around the TV. One image features his aunts and uncles partying down in hip sunglasses and dancing with obvious delight

For a student project he calls “Beverly Hilton” Jang captured celebrities like Frank Sinatra being feted by Ronald Reagan and Milton Berle in a Man of the Year ceremony, and snapped David Bowie, in full-on Ziggy Stardust mode, looking up briefly as he signed autographs for fans in front of the hotel; note the superstar’s loud plaid jacket and shag haircut.

“Michael has always been interested in human beings, their nature, their qualities and their aspirations,” says Phillips. That empathy came into play during the summer of 1983, when a local television station commissioned him to photograph participants in a contest whose winner would present the weather report on an evening newscast. Among the eclectic hopefuls were a priest in a clerical collar, a generously mustachioed fellow in a baseball cap, and a woman with inordinately big hair. Three floor-to-ceiling prints of these weathercasters of tomorrow, accompanied by twelve framed ones, are showcased in a dedicated space.

“He caught a democratic moment in our culture that we don’t have anymore,” says Phillips. “And he did it with kindness and without pretention.”

“Who is Michael Jang?,” the first monograph of his work, will be available at the gallery.