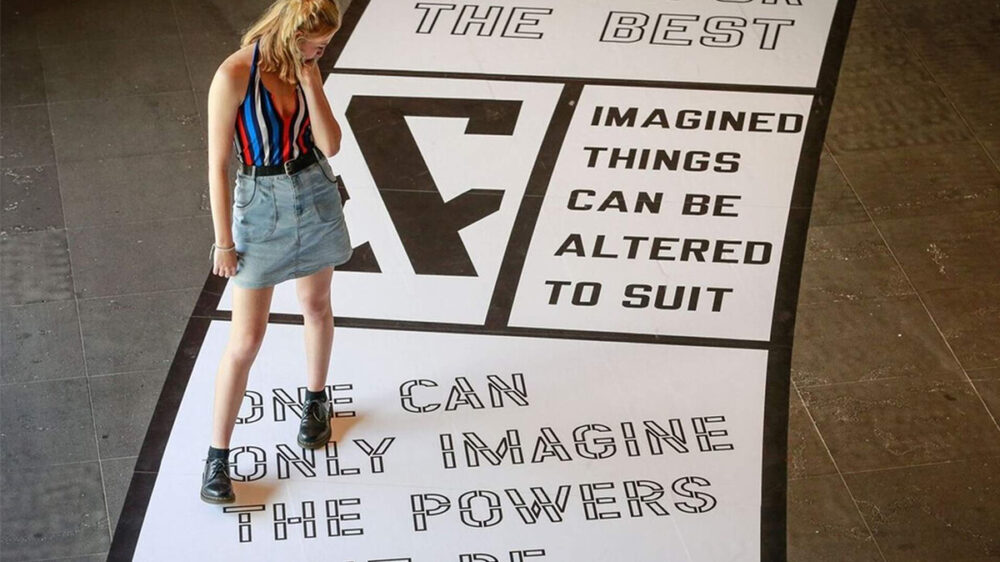 Installation view, Lawrence Weiner: OUT OF SIGHT at the National Gallery of Victoria, Melbourne. Courtesy of the artist, © Lawrence Weiner. Photo: Wayne Taylor. OUT OF SIGHT is a project of See The Vision, Grab The Vision, a 501(c)(3) dedicated to producing innovative public art and programming designed to engage, inspire, and empower youth and participants of all ages

Offsite Exhibition: Lawrence Weiner: OUT OF SIGHT
Exhibition: Next to You
Screening Room: Hearing Aids

OUT OF SIGHT, an interactive social sculpture by American conceptual artist Lawrence Weiner, highlights the whimsical themes of McEvoy Foundation for the Arts’ exhibition Next to You and encourages community connection through visual and performing arts. The installation, organized in San Francisco by the Fort Mason Center for Arts & Culture (FMCAC) in partnership with McEvoy Arts and the Exploratorium, enjoys concurrent presentations at FMCAC’s Marina campus and the Exploratorium. OUT OF SIGHT is on view from October 16, 2021 through January 22, 2022 in the Atrium of 1275 Minnesota Street Project, San Francisco, CA 94107. Admission is free, Tuesday–Saturday, 11am–6pm.

Known for text-based works that recall visual poetry, literary aphorisms, or Zen koans, Weiner frequently transforms gallery walls into artistic messaging boards. In his ground-based mural OUT OF SIGHT, he addresses the viewer with phrases within a simple hopscotch pattern board, creating a pathway to be viewed and navigated, both physically and intellectually. Similar to the McEvoy Family Collection artworks currently on view in Next to You, OUT OF SIGHT celebrates the potential within all of us to connect with ourselves and reconnect with each other through visual arts.

“OUT OF SIGHT is a sorely needed dose of cultural medicine at this time,” says Susan Miller, McEvoy Arts’ executive director. “As the arts continue to recover from the setbacks in the pandemic, collaboration across institutions such as this are ever more important in rebuilding our arts’ ecosystems.”

OUT OF SIGHT has been described as a “generic sculpture” that can adapt itself to different institutions, distinct sites, and specific language communities and has been shown in public spaces including the Chicago Park District; the downtown shopping district of Kortrijk, Belgium; the Pérez Art Museum in Miami; and the National Gallery of Victoria in Melbourne, Australia. Suitable for exploration by families and children, the San Francisco installations are offered in English, Spanish, and Mandarin, creating accessible spaces to safely gather and play together again.

Frank Smigiel, FMCAC’s director of arts programming and partnerships, adds: “Weiner’s OUT OF SIGHT shows how artists continually reimagine where their work can live and what their work can do. In a city with a long history of public art, this work brings Fort Mason and its network of partners into those larger conversations about what art out in the community can spark.”

Lawrence Weiner: OUT OF SIGHT at 1275 Minnesota Street is produced by McEvoy Arts with support of the Minnesota Street Project. The formal unveiling at FMCAC is scheduled for Friday, September 17, 2021, followed by installations at the Exploratorium in late September and October 16 at 1275 Minnesota Street. Concurrent with OUT OF SIGHT at FMCAC, two new commissions will debut the same day: Wat Walls, a painting suite by East Bay muralist Thitiwat Phromratanapongse; and Kindred Swell, a site-specific dance by San Francisco-based choreographer and dancer Kim Ip. And in partnership with BOXBLUR and Immersive Arts Alliance, FMCAC will serve as a key viewing station for Shimon Attie’s Night Watch, a floating visual art installation passing through the San Francisco Bay featuring images of political asylum refugees projected onto a giant LED screen.

Lawrence Weiner is considered a central figure in the development of conceptual art during the 1960s and is renowned for his predominantly language-based artworks, which he presents as sculpture. He attended the New York public school system and spent the late 1950s and early 1960s venturing across the United States, Mexico, and Canada. Solo exhibitions of his work have been held at Museo Nivola, Orani, Italy; Pérez Art Museum, Miami, FL; Milwaukee Art Museum, Milwaukee, WI; Kunsthaus Bregenz, Bregenz, Austria; Regen Projects, Los Angeles, CA; Museu d’Art Contemporani de Barcelona, Spain; and the Whitney Museum of American Art, New York, among others. He participated in documenta 5, 6, 7, and 13; the 36th, 41st, 50th and 55th Venice Biennales; and the 27th Biennale de Sao Paulo. He has received awards from the National Endowment for the Arts; a Guggenheim Fellowship; the Wolfgang Hahn Prize;, a Skowhegan Medal for Painting/Conceptual Art; and an Honorary Doctorate of Humane Letters from the Graduate Center, City University of New York. Weiner divides his time between his studio in New York City and his boat in Amsterdam.

Fort Mason Center for Arts & Culture (FMCAC), a decommissioned military installation converted into a nonprofit cultural center, hosts a lively mix of arts, educational, and cultural programming. Each year FMCAC provides more than $2 million in support to local arts organizations, enabling groups to produce diverse and innovative artworks at the historic waterfront campus. With a nearly four-decade history as an arts and culture destination, FMCAC is now focused on reinvigorating its programming and amenities to better engage the evolving Bay Area creative community. Central to this new vision is the commissioning and presentation of adventurous and unconventional artworks best realized in nontraditional or historic settings. For more information, visit fortmason.org.

McEvoy Foundation for the Arts presents exhibitions and events that engage, expand, and challenge themes present in the McEvoy Family Collection. Established in 2017, McEvoy Arts creates an open, intimate, and welcoming place for private contemplation and public discussion about art and culture. Rooted in the creative legacies of the San Francisco Bay Area, McEvoy Arts embodies a far-reaching vision of the McEvoy Family Collection’s potential to facilitate and engage conversations on the practice of contemporary art. McEvoy Arts invites artists, curators, and thinkers with varied perspectives to respond to the Collection. Each year, these collaborations produce exhibitions in the Foundation’s gallery, new media programs in the Screening Room, as well as many film, music, literary, and performing arts events each year. Exhibitions are free and open to the public. For more health, safety, and admissions information, please visit mcevoyarts.org.

Minnesota Street Project, located in San Francisco’s historic Dogpatch district, offers economically sustainable spaces for art galleries, artists, and related nonprofits. Inhabiting three warehouses, the Project seeks to retain and strengthen San Francisco’s contemporary art community in the short term, while developing an internationally recognized arts destination in the long term. Founded by entrepreneurs and collectors Deborah and Andy Rappaport, Minnesota Street Project was inspired by the couple’s belief that philanthropic support for the arts today requires an alternate model – one suited to the innovative nature of Silicon Valley and the region as a whole. For more information, visit minnesotastreetproject.com.