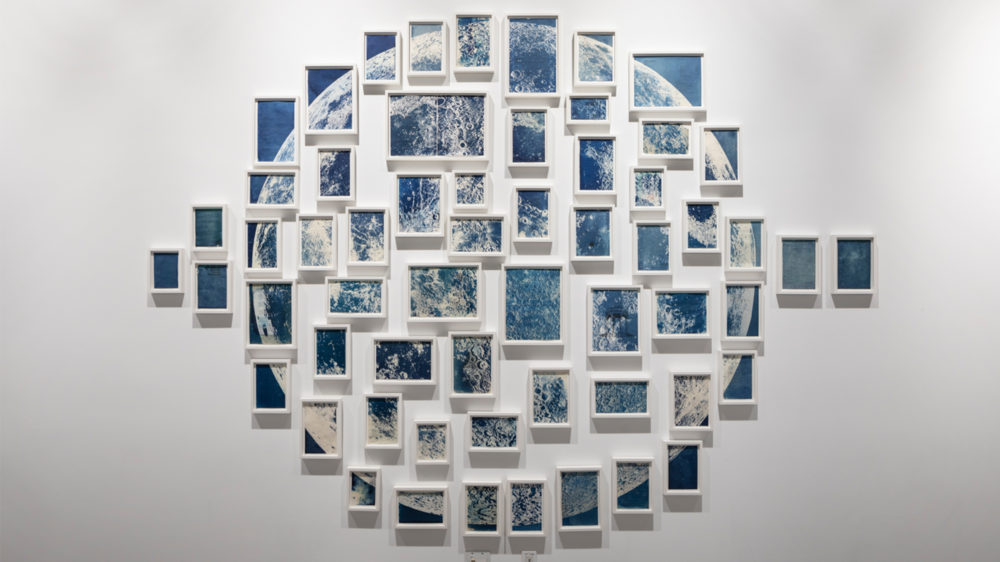 In May, McEvoy Arts invited Bay Area-based artist Ala Ebtekar as one of several artists and curators asked to share their cultural touchstones during the pandemic for the McEvoy Arts Picks series. Rather than offering a mixture of media and culture available at large, the artist returned to specific texts and book pages included in his artwork Thirty-six views of the Moon (2019), on display as part of McEvoy Arts’ exhibition What is an edition, anyway? Mixing poetry, critical theory, and literature, Ebtekar recontextualizes the resonant themes of this work to speak to questions of community, justice, and history in the zeitgeist today.

A Statement from the Artist
The Spring edition of Thirty-six Views of the Moon, a series in four seasons, produced on the occasion of McEvoy Arts’ exhibition, What is an edition, anyway?, marked both the 50th Anniversary of Apollo 9, the first Lunar Module test flight, and the momentous Apollo 11 Moon landing, as well as the Black Panther Party’s “United Front Against Fascism” conference that took place that same weekend [July 18-21, 1969] in Oakland, California.

Thirty-six Views of the Moon is a collection of night exposures, left from dusk till dawn and exposed by moonlight on book pages from texts referencing the moon and night sky spanning the last ten centuries. Working with photographic negatives of the Moon from the Lick Observatory archives in Northern California and treating each book page with Potassium ferricyanide and Ammonium ferric citrate (cyanotype) to make the surface of the page light-sensitive, the pages are then exposed overnight by the UV-light emitted by the moon. The work takes its cue from a poem by Omar Khayyam that imagines us as the objects of the Moon’s omnipresent gaze and, in response, produces a vignette of windows on the Moon that abstract the typical celestial gaze, merging galaxy with ground to collapse space and time.

The small man
builds cages for everyone
he knows,
While the sage,
who has to duck his head
when the moon is low,
Keeps dropping keys all night long
For the
Beautiful
Rowdy
Prisoners.

Paul D did not answer because she didn’t expect or want him to, but he did know what she meant. Listening to the doves in Alfred, Georgia, and having neither the right nor the permission to enjoy it because in that place mist, doves, sunlight, copper dirt, moon—every thing belonged to the men who had the guns. Little men, some of them, big men too, each one of whom he could snap like a twig if he wanted to. Men who knew their manhood lay in their guns and were not even embarrassed by the knowledge that without gunshot fox would laugh at them. And these “men” who made even vixen laugh could, if you let them, stop you from hearing doves or loving moonlight. So you protected yourself and loved small. Picked the tiniest stars out of the sky to own; lay down with head twisted in order to see the loved one over the rim of the trench before you slept. Stole shy glances at her between the trees at chain-up. Grass blades, salamanders, spiders, woodpeckers, beetles, a kingdom of ants. Anything bigger wouldn’t do. A woman, a child, a brother–a big love like that would split you wide open in Alfred, Georgia. He knew exactly what she meant: to get to a place where you could love anything you chose–not to need permission for desire–well now, that was freedom. (pg. 162)

I remember one night at Muzdalifa with nothing but the sky overhead I lay awake amid sleeping Muslim brothers and I learned that pilgrims from every land–every color, and class, and rank; high officials and the beggar alike — all snored in the same language.

Coming together
it is easier to work
after our bodies
meet
paper and pen
neither care nor profit
whether we write or not
but as your body moves
under my hands
charged and waiting
we cut the leash
you create me against your thighs
hilly with images
moving through our word countries
my body
writes into your flesh
the poem
you make of me.

Touching you I catch midnight
as moon fires set in my throat
I love you flesh into blossom
I made you
and take you made
into me.

The Lunar mansions according to Ibn ‘Arabi. The system is consciously relating creation itself with each Mansion embodying its own sound, related to the 28 sounds of spoken Arabic.

In 1970, Gil Scott-Heron released the song “Whitey on the Moon” from his album Small Talk at 125th and Lenox. As a response to U.S. astronauts setting foot on the moon on July 21, 1969, Scott-Heron, whose poignant songs about personal loss and public failure would continue throughout his brilliant career, saw this national adventure as the epitome of hubris amid raging Black discontent and a brutal imperial war in Vietnam. He asked in song form, “A rat done bit my sister Nell with Whitey on the moon. Her face and arms began to swell and Whitey’s on the moon. . . . No hot water, no toilets, no lights but Whitey’s on the moon. . . . Was all that money I made last year for Whitey on the moon?”

Scott-Heron’s ironic yet biting commentary on white supremacy and national arrogance was emblematic of the larger criticisms of and challenges to U.S. power by Black activists domestically and Third World revolutionaries globally. In fact, though Scott-Heron’s critique of the moonwalk came a year after the event, cosmic forces almost seemed in order, for on that day of July 21, 1969, other monumental historical events were taking place as well. As the United States imagined possibility by looking to outer space while profoundly and criminally neglecting racial injustice and imperial power, Black radicals in the United States looked to not-so-faraway places, such as Africa, Asia, and Latin America, for hope and possibility. In fact, July 21, 1969, the very day that U.S. astronauts actually set foot on the moon, was also the first day of the landmark Pan-African Cultural Festival in Algiers, Algeria, where internationally recognized artists, writers, musicians, and revolutionaries from all over the African diaspora and the Third World gathered. And on that same twenty-first day of July 1969, thousands of miles from Algiers and many more miles from the moon, three thousand people gathered in Oakland, California, at the opening of the Black Panther Party conference “United against Fascism,” an assembly of activists who sought to forge an anti-imperialist front in the United States to challenge racist state violence both domestically and globally.

While the United States sought to conquer outer space and to expand its already broad dominion over the Americas, Africa, and Asia, U.S.-based Black activists, artists, writers, and others joined forces with like-minded radicals from throughout the Third World to challenge imperial power and to support national liberation struggles that the United States and Europe were hell-bent on destroying under the banner of the Cold War. Having just fought a successful but brutal anti-colonial war against the French that captured the hearts and minds of revolutionaries in both the Third World and the United States, Algeria became a flashpoint for revolutionary internationalism that connected Oakland to Algiers and Black peoples in the United States to the Third World. Chapter Two [pg. 45-46]

In a library we are surrounded by many hundreds of dear friends, but they are imprisoned by an enchanter in these papers and leather boxes; and though they know us, and have been waiting two, ten, or twenty centuries for us, — some of them, — and are eager to give us a sign, and unbosom themselves, it is the law of their limbo that they must not speak until spoken to.

Ala Ebtekar (b. 1978) is a visual artist who works primarily in painting, drawing, photography, and installation between his native San Francisco Bay Area and Tehran, Iran. Born to Iranian activist/artist parents, he developed an interest in various notions of in-betweenness, which has led him to explore the juncture between history, myth, and culture. Ebtekar’s works are included in the collections of BAMPFA, Berkeley; Devi Art Foundation, Gurgaon, India; de Young Fine Arts Museum, San Francisco; and the Whitney Museum of American Art, New York, among other institutions. He teaches in Stanford University’s Department of Art & Art History, Institute for Diversity in the Arts, and the Hamid and Christina Moghadam Program in Iranian Studies, where he leads the Art, Social Space, and Public Discourse Initiative.