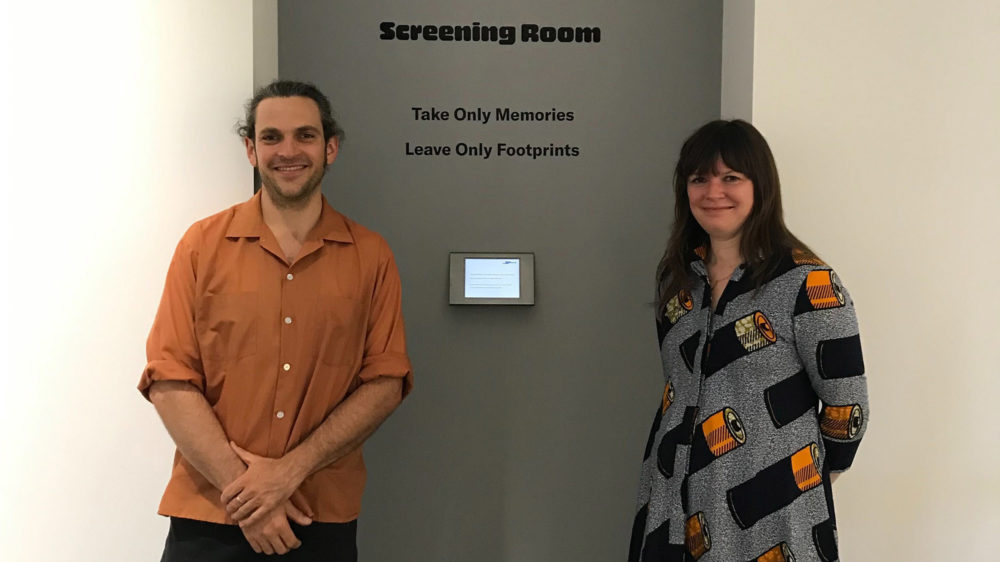 Samuel Sharkland and Kathleen Maguire at a January 19, 2019 "Meet the Curators" event for their Screening Room program Take Only Memories, Leave Only Footprints.

This edition of McEvoy Arts Picks was finalized on May 21, 2020 before widespread protests against police brutality, systematic racism, and in defense of Black lives began. The Exploratorium Cinema Arts Department has approved the publication of these Picks with the acknowledgment that curators and institutions alike must continue to take responsibility for their roles in the amplification of artists’ voices.

In 2018, Kathleen Maguire and Samuel Sharkland co-curated the cross-disciplinary Screening Room program Take Only Memories, Leave Only Footprints in conjunction with No Time, an exhibition that explored human relationships to the natural world in the past, present, and future. Here, Maguire and Sharkland join with Liz Keim, their colleague at the Exploratorium Cinema Arts Program, to share recommendations for McEvoyArts Picks that explore how the presentation and experience of various mediums are influenced and transformed by the shelter-in-place vantage.

“An exquisite corpse between scientists and creatives in time of confinement.” This visual epistolary was launched at the beginning of shelter-in-place as a rebuff to mandated distancing. Reminding us that connection and cross-collaboration is not only still possible, but also essential if we are to generate imaginative solutions when we don’t know what’s going to come next.

“Remains to be Streamed” with Mark Toscano (@preservationinsanity)

The absence of communal cinema spaces, particularly those that are informal, community driven and delightfully chaotic, has been greatly felt. With his weekly Instagram live screenings, archivist and curator Mark Toscano crafts an experience that is comfortingly parallel to the real thing. Toscano’s living room becomes an inviting space from which he shares rare 16mm films and his deep knowledge of experimental cinema with eager viewers who flex their own erudition in the rolling comments.

You Must Remember This: Emergency Dispatch The 1918 Flu and the Movie Industry

Karina Longworth’s deep dives into classic Hollywood cinema are redolent of rich research, compelling social commentary and the right amount of gossip. In this recent dispatch about the 1918 Flu pandemic, a fascinating cinema-going history opens up a space to reflect on current circumstances and – as history tends toward repeating itself – an encouraging vision of a vibrant future.

The Sound We See: COVID Quarantine

Structured as a day with each hour captured in one minute by a different filmmaking team, this piece is the latest edition in Echo Park Film Center’s The Sound We See series. The series began in 2010 and is an ongoing international collaboration of community-made analog films celebrating contemporary urban (and not-so urban!) environments. This COVID edition is marked by its panopoly of diverse styles that, in their observation of how our worlds have become smaller, provide communal solace.

Captured by the forebears of cinema vérité at the beginning of the Summer of Love, this ecstatic performance of “I’ve Been Loving You Too Long” cuts through the decades with it’s ebullient grain. In this style, the filmmaker captures their surroundings as a live witness. So, we too, feel the soulful mourning of Otis Redding’s performance and experience the grief and anguish of an undefined loss.

McEvoy Arts: What’s been most striking to you about the impact this moment is having on the making, presentation, and consumption of culture? How do you see it evolving in the weeks, months, and years to come?

Keim, Maguire, & Sharkland: Commonly, cinema is experienced alone and in the dark, with no tangible connection to other viewers. Yet, now that we are barred from gathering and audiences have scattered, the absence of those other viewers is painfully felt. Previously, the privilege of movement allowed audiences endless opportunities to move through manufactured arenas, venture out and take in cultural offerings for as long as they had the attention. This feeling of being short on time, but with endless horizons is now reversed. Now our space is limited and time feels to have slowed to an irrelevant pace; we are forced to intentionally schedule our engagements with culture as we yearn to find connection. Absent physical interaction, we are resensitized to culture and art as a conduit of shared experience, rather than a spectacle of consumption.

The modes and scales of culture are shifting to fit the time, as they will once more when this period is behind us. However, there will be no mistaking the earnest offerings and amateur efforts from all culture-makers from this era. Like the best experience of cinema, we now value anew the gift of the other and relish the feeling of being together, apart.

Liz Keim is the Director of Cinema Arts and Senior Curator at the Exploratorium. She founded the Cinema Arts Program and film collection in 1982, is published in Left in the Dark: Portraits of San Francisco Movie Theaters, a collection of literary essays on the city’s thriving cinema culture, and her film In the Red (co-directed by Karen Merchant) has screened internationally. On occasion Liz co-teaches at the San Francisco Art Institute and the University of San Francisco; she has served on many local film juries, participates in symposiums nationwide, and has curated cinema programs internationally.

Kathleen Maguire is a media arts programmer at the Exploratorium in San Francisco. Her work includes designing screenings for intergenerational audiences, working closely with artists to craft media-based performances, and curating media works for the Museum galleries. Recent projects include Light Play: Mechanical Entry Points, a multi-year engagement highlighting artists who explore light art through mechanical technologies and Field of View: Mapping Emerging Technologies, a series of temporal engagements examining cutting-edge use of immersive technologies in science and the arts. She was previously a part of the temporal programming group at the American Museum of Natural History and is a graduate of NYU’s Moving Image Archiving and Preservation Program.

Samuel Sharkland is a Bay Area film exhibitor and event producer focused on audience experience through interactive performance and direct engagement. He graduated with a BA in media studies from the University of San Francisco and expanded his interest in performing arts through celebrating cult cinema with Peaches Christ Productions (2004 – 2018) and honing visitor engagement while co-operating the Red Vic Movie House (2008 – 2012). He has worked as a part of Cinema Arts at the Exploratorium since 2008, gaining a deep appreciation for experimental film forms and site-based screenings. He curates short film programs, outdoor screenings, and expanded cinema performances.