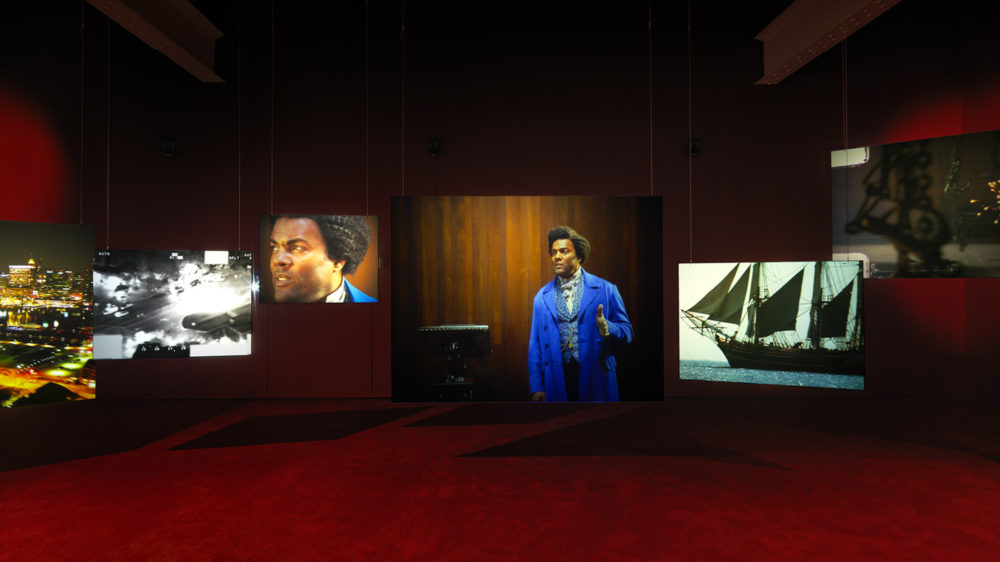 McEvoy Foundation for the Arts is pleased to announce the West Coast debut of Lessons of the Hour, a moving image and photography exhibition by British filmmaker and installation artist Isaac Julien, CBE RA. Opening on October 14, 2020, Lessons explores the life of Frederick Douglass, the visionary African American writer, abolitionist, statesman, and freed slave through a few of his most compelling speeches and moments from his private life. The centerpiece of the exhibition is Julien’s multi-screen film installation Frederick Douglass: Lessons of the Hour (2019) offers a contemplative, poetic journey into Douglass’ zeitgeist, a complex imagining of a man affirming his struggle for equality as a global citizen, and a forceful suggestion that the lessons of the abolitionist’s hour have yet to be learned.

“Lessons of the Hour is a catalyst for conversation, reflection and community,” says Susan Miller, executive director. “With this monumental achievement that demands a physical experience, Isaac Julien welcomes art goers of all backgrounds back to the transcendence of a shared space for a discussion of unparalleled importance. We look forward to providing access to this exhibition freely to all communities in and beyond the Bay Area.”

Adds Nion McEvoy, founder and president: “Isaac is a critically important storyteller whose work has the power to soothe, provoke, and entertain all at once. We are thrilled to be working with him. McEvoy Arts is an accessible art space for all to enjoy museum-quality exhibitions that are aligned with themes in the McEvoy Family Collection. With Lessons of the Hour, we offer visitors, both new and returning, a chance to engage with a mesmerizing installation usually seen at much larger institutions. It is our absolute honor to bring Isaac’s work to the West Coast and the Bay Area.”

Frederick Douglass (1818–1895) is a pivotal figure in the history of abolitionism and social reform in the United States. An escaped and then freed slave, Douglass developed his oratorical skills as a preacher before embarking on anti-slavery campaigns across the northern United States and the United Kingdom, where he expansively documented the sensations of freedom from enslavement and other forms of racial discrimination he felt there as opposed to the United States. He was active in the women’s suffrage movement and published three autobiographies which continue to wield cultural influence. Throughout his lifetime, Douglass, the most photographed man of the nineteenth-century, was a prominent proponent of the medium as a means by which Black people could control their likenesses beyond caricature.

Frederick Douglass: Lessons of the Hour is an immersive ten-screen film installation, hung salon-style to create what Julien describes as a “moving image montage.” The work’s presentation not only echoes the picture-hanging conventions of the era but allows the artist to draw connections between many images at once without relegating any particular detail to the background. Shot with 35mm film and 4k digital technology at sites in the United States and United Kingdom that hold historical significance to the abolitionist’s life, Lessons places Douglass (portrayed by Ray Fearon, a member of the Royal Shakespeare Company) within settings alternately pastoral, domestic, and public. Lessons’ opening sequences present Douglass amidst a sublime natural landscape before giving way to meticulous recreations of nineteenth-century rooms—kitchens, living spaces, and photography studios–offering more intimate details of his life. Midway through we see Douglass as the professional orator, delivering two piecing monologues in the highly formal Royal Academy of Arts in London. Later, Julien introduces contemporary images of drone surveillance and found footage of twentieth-century American life that brings Douglass’ timely words into the present.

Working closely with the art historian Celeste-Marie Bernier on the film’s narration, Julien constructs “tableaux vivants” that reimagine Douglass’ relationships to the influential women and men in his life, among them Anna Murray and Helen Pitts, his first and second wives; Ellen and Anna Richardson, who raised funds to purchase Douglass’ freedom and supported his return to America; the suffragette Susan B. Anthony; feminist activist and translator Ottilie Assing; and JP Ball, a pioneering African American photographer. Julien’s inclusion of these historical figures indelibly ties them to our contemporary understanding of Douglass’ legacy, offering an intersectional approach to the ongoing struggle for racial justice and human rights.

Three of Douglass’ seminal speeches provide the thematic core of Lessons. “Lessons of the Hour” (1894), his final delivered speech, addresses lynching, suffrage, and legacies of slavery in the post-Civil War American South. “Lecture on Pictures” (1861), in which Douglass famously declared that “rightly viewed, the whole soul of man is a sort of picture gallery,” draws a connection between advances in photography and equality. “What to the Slave is the Fourth of July?” (1852), Douglass’ most well-known speech, offers a pointed critique of American democracy advanced by the condition of slavery. Employing the nonlinear narrative devices for which he is acclaimed, Julien crafts a multi-layered meditation on the historicity and contemporaneity of Douglass’ writings.

Isaac Julien’s pioneering artistic practice incorporates the moving image, photography, and installation to create open-ended narratives that invite spectators to actively interpret the work through a physical and sensorial immersion. His 1989 documentary-drama exploring author Langston Hughes and the Harlem Renaissance Looking for Langston garnered Julien a cult following while his 1991 debut feature Young Soul Rebels won the Semaine de la Critique prize at the Cannes Film Festival. In the decades since, Julien’s body of work has touched on the iconic Brazilian-Italian architect Lina Bo Bardi (A Marvellous Entanglement, 2019), geopolitical immigration policies (Western Union Small Boats, 2007), and relationships between art and the effects of capital (Playtime, 2014), among others. His singular attention to set décor, lighting, performance, as well as editing, sonic, and visual effects creates space for reflection on global forces shaping history and culture.

McEvoy Arts’ presentation of Lessons is developed in collaboration with the Isaac Julien Lab at the University of California, Santa Cruz to give a community of postgraduate students a practicum experience in curation, installation, and production of an immersive moving-image work. The Lab is taught by Julien, a Distinguished Professor of the Arts at UC Santa Cruz, and independent curator and writer Mark Nash and provides opportunities for theoretical research, curatorial debate, and artistic production. Collaboratively, the Lab and McEvoy Arts are producing a series of conversations and installation documentation for the course and select public viewing. The initiative further develops McEvoy Arts as a space for dialogue, education, and reflection in the arts by participants of all backgrounds.

The film installation is accompanied by Julien’s tintype portraits and mise en scènes photographs of the film’s subjects that explore a shared interest in photography between Douglass and Julien, as well as a complementary grouping of works from the McEvoy Family Collection, selected by Julien and Nash. A catalog on the project is forthcoming in Fall 2020. Additional programs, detailed below, are to be announced in full later this Summer.

Lessons of the Hour runs through March 13, 2021 and is free and open to the public.

In the Screening Room
Artist, curator, and educator Leila Weefur curates a video program that creates an intertextual dialogue between emerging and established filmmakers whose works function as thoughtful responses to the question, “what is America today?”Across a series of “film movements,” Weefur generates a compositional discourse that queers the historically linear Black diasporic narrative. Concepts of movement—in screens, language, borders, and history—are threaded throughout the program and Weefur’s practice at large, which explores spatial and structural complexities that influence cinematic narrative and the aesthetics of Black being.

Conversations and Events
In conjunction with both Lessons of the Hour and Weefur’s video program, McEvoy Arts is developing a calendar of virtual and in-person public programs in partnership with a diverse cohort of organizations. The events prioritize opportunities for intergenerational and intersectional conversations on topics thematically embedded in the exhibition, including memory, historical truth, civil rights, and photography’s relationship to the moving image.

Isaac Julien, CBE RA (b. 1960) is an artist, filmmaker, and educator whose multi-screen film installations and photographs incorporate different artistic disciplines to create a poetic and unique visual language. Solo exhibitions of his work have been held at ARoS Aarhus Kunstmuseum, Denmark; The Royal Ontario Museum, Toronto; MAC Niterói, Rio de Janeiro, Brazil; the De Pont Museum, Netherlands; Museum of Modern Art, New York; the Art Institute of Chicago; Pompidou Centre Paris; and MoCA Miami. He has exhibited at the La Biennale de Venezia, Johannesburg Biennale, Moscow Biennale of Contemporary Art, and Shanghai Biennale. Julien is the recipient of The Royal Academy of Arts Charles Wollaston Award 2017 and was appointed a Commander of the Order of the British Empire (CBE) in 2017. He is currently a Distinguished Professor of the Arts at the University of California, Santa Cruz, where he is developing the Isaac Julien Lab. He lives and works in London and Santa Cruz.