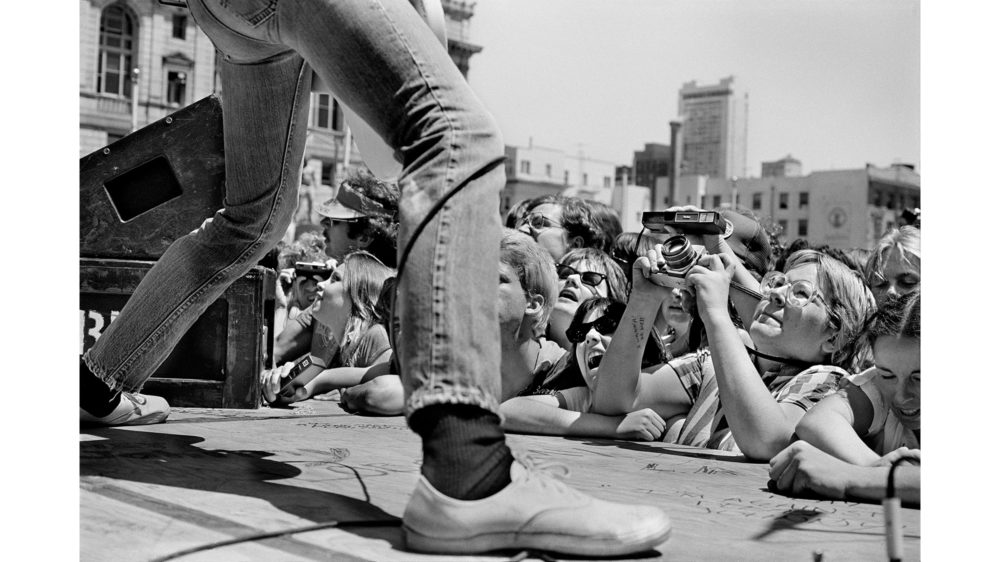 Michael Jang’s California, curated by Sandra S. Phillips, opens at McEvoy Foundation for the Arts on September 27, 2019. Michael Jang’s California explores the artist’s career as a portrait and street photographer in Los Angeles and the San Francisco Bay Area, with a special focus on Jang’s early work as he was discovering the medium.

While Jang has had a significant career as a professional portrait photographer, he has also been photographing people in the streets for over fifty years. As a student at California Institute of the Arts and the San Francisco Art Institute in the 1970s, he demonstrated an uncanny ability to capture both the idiosyncratic and the quintessential in a wide range of subjects, from his own family at home in suburbia to celebrities of the era partying at the Beverly Hilton.

Michael Jang’s California is the first major solo exhibition of the artist, assembling dozens of vintage and contemporary prints as well as notebooks and ephemera from seminal encounters over the years. This survey presents a rare journey through Jang’s career, from his early student work in the 1970s—much of which is largely unknown—to commercial headshots of aspiring TV weather reporters in the 1980s, to his series on teenage garage bands in the early 2000s. A selection of works from the McEvoy Family Collection by Diane Arbus, Lee Friedlander, and Garry Winogrand situates Jang’s work among his major influences.

Curator Sandra Phillips says: “These wonderfully sprightly pictures, full of the pleasures and craziness of life, amplify and extend the tradition established by the photographers in the [Museum of Modern Art’s] famous New Documents show in 1967—Arbus, Friedlander and Winogrand. It is a true pleasure to present Michael Jang’s work at McEvoy Foundation for the Arts.”

Michael Jang (b. 1951) is a photographer who has documented a number of groups and subcultures from all strata of society. He has earned a living as a portrait photographer, capturing iconic figures such as Jimi Hendrix, Ronald Reagan, and Robin Williams, among others. His work is featured in the collections of the National Baseball Hall of Fame, Cooperstown; the New York Public Library; the Rock and Roll Hall of Fame, Cleveland; and San Francisco Museum of Modern Art. Who is Michael Jang? (Los Angeles: Atelier Éditions, 2019), the first monograph of Jang’s work, is to be released this Fall. Jang received his BFA from California Institute of the Arts, Valencia and MFA from the San Francisco Art Institute. He lives and works in San Francisco.

Sandra S. Phillips is curator emerita of photography at the San Francisco Museum of Modern Art, which she joined in 1987. She has organized numerous exhibitions of modern and contemporary photography including Exposed: Voyeurism, Surveillance and the Camera Since 1870, Diane Arbus Revelations, Dorothea Lange: American Photographs, and Daido Moriyama: Stray Dog, among others. Phillips was previously curator at the Vassar College Art Museum, and has taught at various institutions including the State University of New York, New Paltz; Parsons School of Design, New York; San Francisco State University; and the San Francisco Art Institute. She has authored and co-authored numerous catalogs, including Charmed Places: Hudson River Artists and Their Houses, Studios, and Vistas (New York: H.N. Abrams, 1988); Perpetual Motif: The Art of Man Ray (New York: Abbeville Press, 1989); and André Kertész: Of Paris and New York (Chicago: The Art Institute of Chicago, 1985).