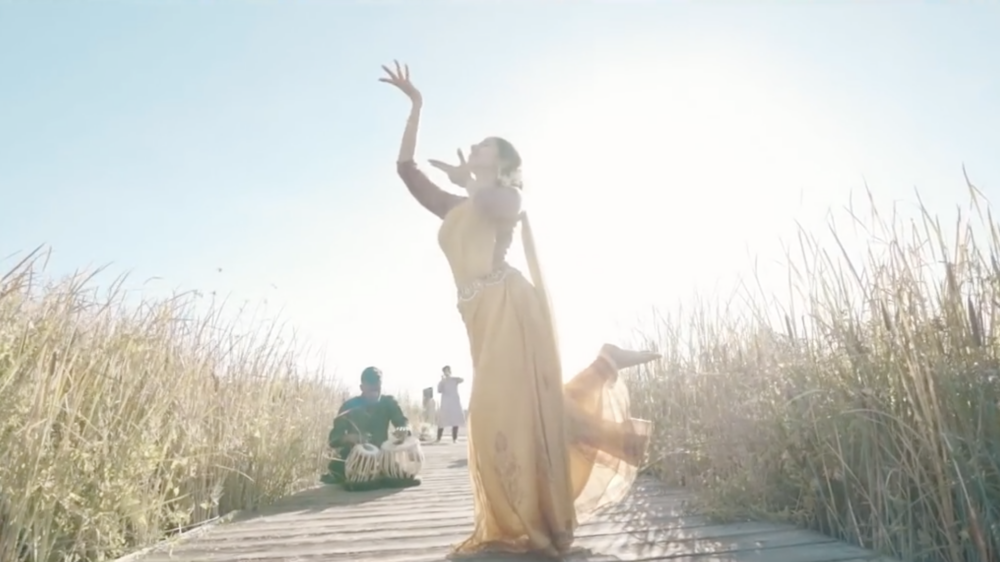 SAN FRANCISCO, CA, July 20, 2021 — McEvoy Foundation for the Arts is pleased to announce a series of collaborative live engagements from September through November throughout the San Francisco Bay Area, in conjunction with its current exhibition, Next to You (May 28 – December 4, 2021). The events enrich the artworks on view from the McEvoy Family Collection and their depictions of dance, theater, music, circus arts, film, and other creative forms, by inviting interdisciplinary networks of artists and institutions to create collective spaces for reconnection. From the city of Watsonville to the historic Castro Theatre in San Francisco, the upcoming events celebrate pillars of the Bay Area’s performing arts communities, their ongoing contributions, and the return of the region’s live art experiences.

“Next to You events intend to encourage exploration of the exhibition’s core themes and ideas, to help us rebuild and find community through the performing arts,” says Susan Miller, McEvoy Arts executive director. With rich offerings of live programming in dance, music, and film, there is truly something for everyone as we return to a vibrant, artistic Bay Area.”

McEvoy Arts’ Fall event season launches on Saturday, September 11 with Radius, a music and dance performance hosted by CounterPulse in collaboration with McEvoy Arts. Set in relation to the urban surroundings of McEvoy Arts, this site-specific and improvisational performance sees a troupe of experimental dancers move and respond to a group of electronic musicians, and vice versa. Informed by the Bay Area’s long history as a hub of improvisational and experimental art, Julie Phelps, artistic & executive director of CounterPulse and a principal performer, aims to create a temporary zone governed by collaboration and fluidity rather than hierarchy and structure.

“Radius comes at a time when many performers in the live arts have been uncharacteristically estranged from the stage and group collaborations during the pandemic,” says Phelps. “On one level the aim of this project is simple: to reunite performers with strong personal improvisational practices spanning music and dance—showcasing our plural communities, reinvesting in artist peer networks, and engaging audiences hungry for live, body-based art. Beyond that, this project is part of larger artistic inquiries exploring emergent dynamics between bodies and transdisciplinary co-creation as a study of radical solidarity and inventive social connection.”

“We are thrilled to partner with Los Cenzontles and McEvoy Arts to present this beautiful program,” says Consuelo Alba, director and co-founder of the Watsonville Film Festival. “It’s a wonderful opportunity to celebrate Mexican-American culture, honor our farm workers for their essential work and build bridges between urban and rural communities.”

On Sunday, October 3, McEvoy Arts joins forces with the Center for Asian America (CAAM) for A Filipino American Heritage Month Celebration at San Francisco’s historic Castro Theatre. The local, creative Filipinx American community takes center stage with a slate of new films, live performances, and conversations. With the Castro Theatre closed for over a year due to the pandemic, the day’s schedule (to be announced) marks one of the first programs at the landmark venue for independent arts organizations in the Bay Area.

Closing out its Fall events on Sunday, November 7, McEvoy Arts and the Tiny Dance Film Festival return to the Roxie Theater with We Belong, a selection of international and local short dance films that revel in the joy, eccentricity, and variety of human connection. Curated by Tiny Dance founders Kat Gorospe Cole and Eric Garcia this cross-genre lineup features Bharatanatyam, hip hop, and contemporary dance.

We Belong is a love letter to human connection,” says Kat Gorospe Cole, co-founder of Tiny Dance Film Festival. “It reminds me of how we create spaces for kinship, laughter, playfulness and solace with each other—things that have felt all the more important to me over the last year. May the joy we feel in this program propel us toward the continued work for equity.

Further program details are to be announced at mcevoyarts.org. For registration and ticket information, visit mcevoyarts.org/events. All in-person events are presented in accordance with current health guidelines.

How can dance and music reveal the dichotomies of intimacy and power? By empowering experimental dancers and electronic musicians, CounterPulse artistic and executive director Julie Phelps aims to create a temporary zone governed by collaboration and fluidity rather than hierarchy and structure. Influenced by and set in relation to the urban surroundings of McEvoy Arts, this site specific and improvisational performance is the first event of the CounterPulse Festival (September 9–18). Responding to both harmony and discord, Radius is a rehearsal of being with—with ourselves and our senses, with other people, and with the land. Following the presentation at McEvoy Arts, CounterPulse explores Radius within the rural environment of the Djerassi Artistic Residency Program on Saturday, September 18 in conjunction with Network, a project by Krista DeNio >> Moving Ground.

A co-production of McEvoy Arts and CounterPulse.

In this documentary by award-winning director and producer James Keach, Ronstadt, musician Jackson Browne, and a busload of Cenzontles journey to Banámichi in Sonora, Mexico, where Ronstadt’s grandfather was born. In honor of Mexican Independence Day, the virtual screening is augmented by a free, outdoor concert in Watsonville City Plaza during the weekly farmers’ market on Friday, September 17, featuring music by Los Cenzontles and Los Originarios del Plan, and a dance performance by the Watsonville-based Estrellas de Esperanza youth folkloric group. The event honors the impact of Mexican music and culture on the Bay Area’s performing arts traditions and celebrates the vibrancy of the Pajaro Valley’s agricultural community and farmworkers. Additional support for Celebrando la Cultura is provided by the City of Watsonville and the Watsonville Campesino Appreciation Caravan.

A co-production of McEvoy Arts and Los Cenzontles Cultural Arts Academy, with the Watsonville Film Festival.

The local creative Filipinx American community takes center stage to kick off Filipino Heritage Month with a slate of new films, live performances, and conversations. With the Castro Theatre closed due to the pandemic, the day’s schedule (to be announced) marks one of the first programs at the landmark venue for nonprofit organizations in the Bay Area. Furthermore, this event honors the service of the Bay Area Filipino community in the healthcare industry throughout the pandemic.

A co-production of McEvoy Arts and the Center for Asian American Media (CAAM).

We Belong
November 7, 2021 | Roxie Theater, San Francisco
Tickets to be announced at mcevoyarts.org and detourdance.com.

We Belong presents a selection of international short dance films that revel in the joy, eccentricity, and variety of human connection. Curated with a sensitivity to accessibility and inclusivity, this cross-genre lineup features Bharatanatyam, hip hop, and contemporary dance. Subjects range from Black trans femme love to the Chinese diaspora and language to the irreverence of office furniture—each offering a refreshing alternative to dominant narratives. This program is curated by Kat Gorospe Cole and Eric Garcia, founders of the Tiny Dance Film Festival, a San Francisco-based festival that prioritizes films that embrace brevity, embody the concept of dance with the camera, and amplify marginalized voices.

A co-production of McEvoy Arts and the Tiny Dance Film Festival, with the Roxie Theater.

The Center for Asian American Media (CAAM) has been dedicated for 40 years to presenting stories that convey the richness and diversity of Asian American experiences to the broadest audience possible. As a nonprofit organization, CAAM funds, produces, distributes, and exhibits works in film, television, and digital media. CAAMFest, formerly the San Francisco International Asian American Film Festival (SFIAAFF), celebrates the world’s largest showcase for new Asian American and Asian film, food, and music programs. CAAM is the recipient of the 2021 Peabody Award for the co-production of PBS documentary series Asian Americans.

Los Cenzontles Cultural Arts Academy is a grassroots artist-driven organization committed to amplifying the roots of Mexican culture through classes, events, media, and performances. Founded in San Pablo, CA in 1994 by musician and educator Eugene Rodriguez, Los Cenzontles provides the local community with a family-friendly setting for traditional arts education and cultural events. The Los Cenzontles Academy connects students of all ages with maestros of traditional Mexican genres instilling a sense of cultural pride and participation in living traditions. Our full calendar of events features performances by our students, our own professional touring group, Los Cenzontles, and well-known world musicians and visiting artists. Los Cenzontles documents this journey of continuing the long tradition of authentic Mexican art with CDs and DVDs to share with the world and future generations.

CounterPulse is building a movement of risk-taking art that shatters assumptions and builds community. It provides space and resources for emerging artists and cultural innovators, serving as an incubator for the creation of socially relevant, community-based art and culture. CounterPulse acts as a catalyst for art and action; creating a forum for the open exchange of art and ideas, catalyzing transformation in our communities and our society. It works towards a world that celebrates diversity of race, class, cultural heritage, artistic expression, ability, gender identity, and sexual orientation and strives to create an environment that is physically and economically accessible to everyone.

The Roxie Theater, a San Francisco landmark in the Mission District that reopens in May 2021, brings people together to meet and connect through distinctive cinematic experiences. Guided by the passionate belief that engaging with a movie doesn’t end with the credits, the Roxie invites filmmakers, curators, entertainers and educators to interact with our audiences. The Roxie provides inspiration and opportunity for the next generation and serves as a forum for the independent film community reflecting the spirit of the diverse Bay Area population.

Tiny Dance Film Festival is a film festival based in San Francisco that features short dance films from across the globe. Founded in 2013, TDFF prioritizes films that upset the trend, stretch into new territory, challenge dominant narratives, and embrace brevity.

The Watsonville Film Festival showcases Latinx filmmakers and stories that illuminate our shared humanity and inspire positive change. Founded in 2012, WFF developed from a grassroots collective into a non-profit arts organization offering year-round programming that celebrates powerful filmmaking and local creativity. WFF strives to make its programs accessible to all, leveraging the power of film to build bridges, spark conversations and imagine new possibilities in the heart of Monterey Bay.

Next to You is an exhibition of modern and contemporary artworks from the McEvoy Family Collection that celebrates the joy, vitality, and healing power of the performing arts. As the world emerges from the coronavirus pandemic and its requisite isolation, Next to You acts as a farewell ballad to a strange and challenging time and a look towards a future where we are reunited. With the performing arts cultural sector largely inaccessible during the pandemic, the exhibition showcases dance, theater, music, circus arts, film, and other creative forms.

In the Screening Room, Alison O’Daniel guest curates Hearing Aids, a program of short films and videos that consider a new sensory sensitivity to our surroundings and a greater awareness of the body’s intricacies of communication. The films, spanning the 1970s to the 2010s, explore sensory experience in relation to topics as varied as urban surveillance, the natural landscape, and Indigenous history. Session 1 screens daily from May 28 through August 31, 2021.  Session 2 debuts September 1 and runs through December 4, 2021.

McEvoy Foundation for the Arts presents exhibitions and events that engage, expand, and challenge themes present in the McEvoy Family Collection. Established in 2017, McEvoy Arts creates an open, intimate, and welcoming place for private contemplation and public discussion about art and culture. Rooted in the creative legacies of the San Francisco Bay Area, McEvoy Arts embodies a far-reaching vision of the McEvoy Family Collection’s potential to facilitate and engage conversations on the practice of contemporary art. McEvoy Arts invites artists, curators, and thinkers with varied perspectives to respond to the Collection. Each year, these collaborations produce exhibitions in the Foundation’s gallery, new media programs in the Screening Room, as well as many film, music, literary, and performing arts events each year. Exhibitions are free and open to the public. For more health, safety, and admissions information, please visit mcevoyarts.org/visit.

High-resolution images and additional materials are available by request to press@mcevoyarts.org or wendy@norriscommunications.biz.