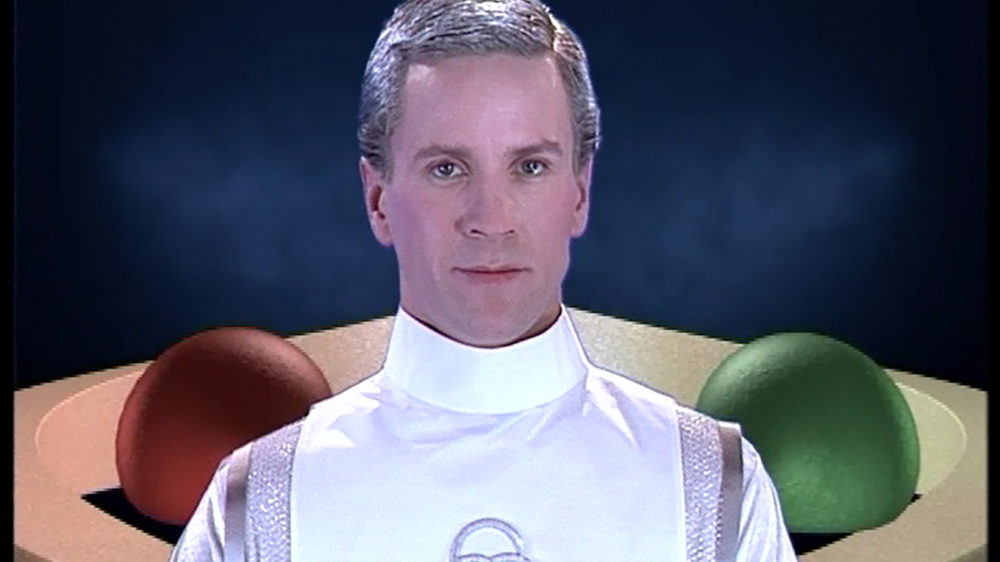 Since its emergence in the 1960s, artists have used video art to both critique the medium of television and to appropriate its strategies to explore new approaches to art, filmmaking, and performance for the camera. Introspections, curated by video and performance artist Mads Lynnerup, presents five short videos that satirize commercial media, television or more recent digital platforms, to explore language, identity, and the construction of self. The thirty-minute program is organized in conjunction with McEvoy Arts’ exhibition True Blue Mirror: Ellen Berkenblit and Sarah Braman and runs daily at the McEvoy Foundation for the Arts from February 8 – May 4, 2019.

By means of self-portraiture in playful parodies of commercial media conventions, the works in Introspections feature the artist/maker as director, and actor/subject. In Nao Bustamante’s Rosa Does Joan (1992), the artist infiltrates The Joan Rivers Show in a convincing performance as an exhibitionist, manipulating an unsuspecting talk show host and public. William Wegman’s 1972 commercial-length Deodorant parodies the desire of social acceptance promised in personal hygiene ads of the day, and Unfollow (2014), Yung Jake’s riff on the music video, satirizes the genre’s often-told “boy-meets-girl” love story by confronting the influence of social media on relationships. Lynnerup notes, “The featured works facilitate an introspective viewing experience that compels the viewer to reflect on the medium of video and television. Using this increasingly mainstream medium, the five artists in Introspections introduce decidedly uncommon ideas into the popular culture of the time.”

Presented in conjunction with True Blue Mirror: Ellen Berkenblit and Sarah Braman (February 8 – May 4, 2019), the works in Introspections amplify the exhibition’s themes of language and the creative voice, representation and identity, and the tension between the public and private spheres in the practice of making art.