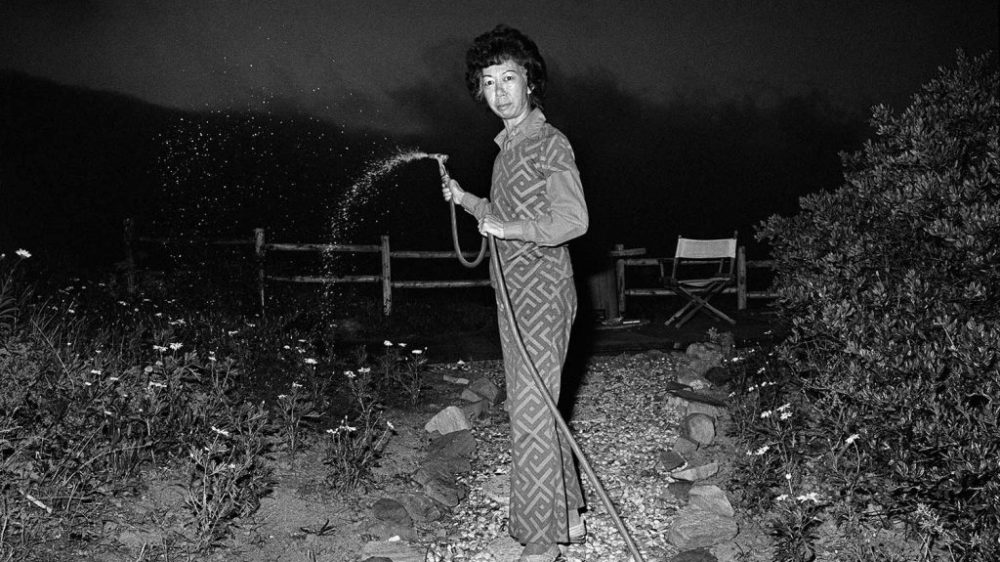 Michael Jang has kept much of his work hidden in a box at his home in San Francisco for the last forty years. Luckily for us, he decided to drop a selection of photographs off at SFMOMA for consideration in 2002. His early photographs from the 1970s, especially the ones of his very suburban, extended Chinese American family, made an impression on the curators at the time. Deeply funny and idiosyncratic, Jang’s images feel relevant to many of the national conversations happening right now about immigration, assimilation, and the elusive American dream.

Ahead of the publication of his first monograph and a major retrospective exhibition opening at the McEvoy Foundation for the Arts in San Francisco in September, I spoke with Jang about photographing his family, the restrictions of intentionality in photography, and what it takes to sneak into Hollywood parties.

Will Matsuda: I want to start with your series The Jangs, which you made in the summer of 1973. Why did you make those pictures then, and how do you feel about them now?

Michael Jang: Old pictures often just look like old pictures. So what is it that makes these photos interesting still? The vintage rugs? I honestly don’t know. Erik Kessels, in the intro to my book, Who Is Michael Jang?, talks about the humor in the work, and how that’s somewhat of a rarity in the fine-art photography world. Humor wasn’t totally intentional in these photos.

I felt out of place in art school because in critiques, you are supposed to put up your work and talk about your intentions. I was uncomfortable with that. Someone thirty years later told me, “Michael, you’re just a responder.” That’s what I do, I respond. Let’s suppose you have an idea for a photo, and then you go out and make it. Then the photo is only as good as the idea. It’s missing magic.

Matsuda: That’s interesting for me to hear, because I work in the complete opposite way. I spend a long time thinking about my intentions with a photograph, and then I set out and it either meets those intentions or it doesn’t. That’s what makes a photo successful for me. But it is agonizing sometimes.

Jang: That’s the limitation. In movies, too, if a filmmaker captures an unscripted scene, there’s the magic. Same with music and improvisation, like in jazz. That’s what I’m looking for.

Matsuda: Can’t a preplanned photo, or one with a clear intention behind it, have magic too? It doesn’t matter how much you plan, a photograph never happens perfectly. It doesn’t happen in a vacuum.

Jang: I’ll meet you halfway on this one. Yes, you’re right, it’s good to have an outline of a plan. But it’s also about having an open mind to allow yourself to see what is actually there. Seeing can be done with the heart as well as the eyes.

I respond to pools of energy. It’s sort of a parallel way to look at the world. You shoot without looking through the camera. Robert Frank shot from the hip in that photo of the cowboys (Bar, Gallup, New Mexico, 1955) in The Americans. That’s feeling something. You’re feeling energy. There’s juice in the picture.

Matsuda: I think the reason your photographs are successful and timely is that there are serious implications in them, even if you didn’t intend it.

Jang: Well, I didn’t think these pictures were very good when I took them in the ’70s. I put them away in boxes. A few decades later, I dropped them off at SFMOMA and they liked them. Over the last ten years, I’ve brought them out in little pieces in zines or do-it-yourself pop-up exhibitions. So I’ve been testing the water in San Francisco, but it’s kind of like if your mom likes your pictures. It’s not really a test; this book and exhibition are a real test. I have no idea what people are going to think. I will be just as surprised as anybody if someone has a special interest in them. It feels kind of like a miracle that the pictures aren’t still in boxes.

Matsuda: If you didn’t think they were very good and you had them boxed up, what made you bring them to SFMOMA?

Jang: When you’re young, you are very sensitive to critiques. Your work gets torn apart. It doesn’t take much to think, “These pictures probably have no future.” I wanted to move on and try to make a living off of photography. I never was in the game either. You’re supposed to get your MFA, then become a teacher, then get a National Endowment for the Arts or Guggenheim grant, and make some coffee-table books. In a way, my career is happening in reverse. Here I am in my late sixties and just now gaining some notice. It’s a gift. A lot of people my age are done and forgotten about.

Matsuda: The reason these photos are meaningful in this moment, to me at least, is that you are directly questioning the exclusivity of who gets to be American and who can live out the American dream. There’s a sort of jaded irreverence in the photos, and I think therein lies their power.

Jang: People have said we look like the Chinese Brady Bunch.

Matsuda: Right, and when you talk about these photos not being serious, I disagree. I think they are totally serious.

Jang: You’re right. Sometimes artists deflect questions, because they don’t want people to get too close. But please understand, when I made them I wasn’t serious. It was pure fun. It is only now that they are being looked at critically. Others have deemed them “serious,” not me.

One gallerist was looking at the photos, and told me, “You have David Carradine on the TV in a photo, who was a white guy playing a Chinese guy in the show Kung Fu. I mean c’mon. You knew what you were doing.” I had to laugh. Subconsciously, yes, but at the time it was done without thinking. And also done without planning to show it to anyone. But I think when you put pressure on yourself to have a statement about your family, it could become a problem. It might be a little boring even.

Matsuda: I also want to talk about your self-portraits, which are peppered throughout the book. These were some of my favorite pictures. We get an idea of the type of person you are from the type of photographs you take, but it really comes across in the self-portraits. The slyness, the smirk. Are you still making self-portraits? What do you think about them now?

Jang: I’d like to plead the fifth, but also bad memory. It’s been forty years!

Well, actually, one of the self-portraits is on the cover, and there are six people spread across the frame. That’s hard to do when you are composing the shot by looking through the camera. But I was just hand-holding it and hoping for the best. That’s the game of it, as well as the beauty.

In school, I wasn’t really interested in academics talking to me about what a photograph should do. Lee Friedlander said to go out and shoot, to have fun, and that it is just a game. That resonated with me.

I still have my notes from Friedlander’s class at CalArts in 1973. One of them says, “My pictures have no use for anything except my own pleasure. It’s not their function whether you like them or not. If I exhibit, that’s someone else’s problem. They ask me.”

Matsuda: While you were at CalArts, you were fabricating press passes to get into parties with the Hollywood elite. You must have some wild stories from that time.

Jang: I checked out a Leica from school and took it into town, and I saw Bowie at the Beverly Hilton. I found out that every Saturday night, there was a major Hollywood party or event, so I kept going back.

The events are all the same. The stars arrive, the paparazzi are there waiting outside, they pose for a picture, and then they go in. I thought, hold on, that’s where the pictures are. So I had to get inside. I did that any way I could. I dressed up in a suit and snuck in through the back door, but I usually got kicked out.

The series was about the adrenaline rush of sneaking in just as much as it was an essay on parties in Hollywood. I know that now these pictures are impossible. If Jay-Z was at the Beverly Hilton in 2019, would you be able to sneak in?

Jang: But could I sneak in? Maybe.

Will Matsuda is a photographer and writer based in Portland, Oregon.

Michael Jang’s California is on view at the McEvoy Foundation for the Arts, San Francisco, from September 27, 2019–January 18, 2020. Who Is Michael Jang? was published by Atelier Editions in September 2019.