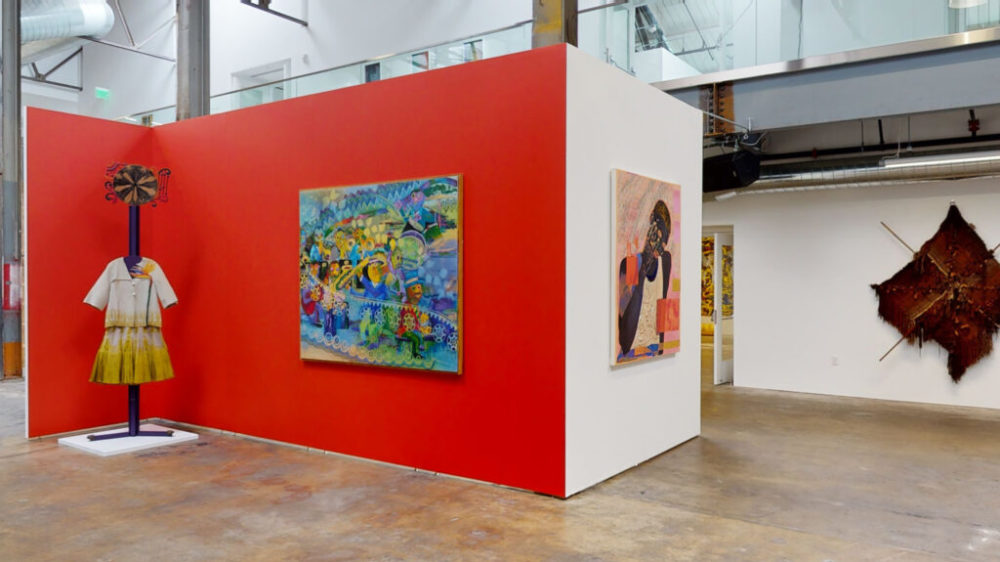 Work from the “Invincible Summer” show includes “Bird of Paradise Jacket and Crown, Ode to Tie-Dyed Suede” (left) by Jae Jarrell, “Basie at the Apollo” by Wadsworth Jarrell and “Giovanni in the Meadows” by Amani Lewis presented by the Jenkins Johnson Gallery, and “At Least Both Your Parents Are Brown” by Kira Dominguez Hultgren presented by Eleanor Harwood Gallery. Photo: Minnesota Street Project

Exhibition: In This Light

In 2020, an art show doesn’t just come with gallery notes and a price list. Instead, expect temperature checks, social-distanced viewing and plenty of hand sanitizer.

To see Minnesota Street Project’s first ever group gallery show, “Invincible Summer,” visitors must wear a mask and look into a screen to be scanned for a high temperature before entry. It’s almost a Stanley Kubrick experience, like something out of “2001: A Space Odyssey,” or maybe the magic mirror from “Snow White.” In any other year, one might mistake it for an interactive video art installation instead of a pandemic norm.

“We’ve been fighting a battle between access and rejection as we think about: ‘How do we let people into the building, and how do we keep everybody safe and feeling safe?’ ” says Andy Rappaport, co-founder of Minnesota Street Project and the Minnesota Street Project Foundation with wife Deborah Rappaport. “This is all stuff we’ve taken a crash course in that we wish we’d never had to learn.”

MSP’s atrium space, with its open central floor and bleacher-seating design by Jensen Architects, is often used for large public programs, something that won’t be happening in the immediate future given restrictions on crowd size. MSP is employing an online reservation system that limits the number of people in the atrium to 25 for one-hour visits. Individual galleries also require appointments for admittance.

Andy Rappaport has joked that he and Deborah are San Francisco’s “dumbest landlords” given the amount of communal space they had incorporated into MSP, because most other commercial art centers try to maximize the amount of rented tenant space for profit. But the decision has paid off in this coronavirus era.

“By accident we end up with exactly the asset the community needs at this moment,” says Andy Rappaport. “It’s a big space we can configure however we want and accommodate moderate numbers of people who can be as far apart as they need to be.”

For the first time, walls have been added to the space by facilities director Michael Rubel, creating the feeling of gallery rooms while preserving the essence of the open design.

The 4-year-old Dogpatch arts hub at 1275 Minnesota St. had been closed to visitors — though individual galleries have continued making appointments with clients on an as-needed basis — since the shelter-in-place order took effect in San Francisco on March 16.

During that time, gallerists and staff have met weekly in videoconferences where the idea for presenting a group show in the central atrium and second-floor mezzanine was born. The group show is just one of several ways the project and foundation are responding to both the pandemic and the renewed Black Lives Matter activism shaping the current landscape nationwide.

Another is the creation of two grant-making programs through the nonprofit Minnesota Street Project Foundation. The California Black Voices Project and Grants for Arts Equity are designed to “begin addressing the systemic racism in the art world,” says Deborah Rappaport. (The Rappaports committed an initial $150,000 from their family foundation.)

MSP officially reopened June 30, by appointment, following the launch of the new Minnesota Street Project Adjacent online viewing portal, where the group show is also on display. “Invincible Summer” includes work from all the galleries at MSP, while a separate show within the space titled “In This Light,” presented by McEvoy Foundation for the Arts, features the work of MSP Studio Program artists Miguel Arzabe, Alison Pebworth, Charlene Tan and Richard T. Walker.

“Invincible Summer” includes 81 works by 33 artists that were selected by the gallerists in response to a quote by Albert Camus from “Return to Tipasa,” an essay published in 1953: “In the depths of winter, I finally learned that within me there lay an invincible summer.”

The quote was chosen by MSP director Julie Casemore as a meditation on pandemic life (the show was already in progress when George Floyd was killed on May 25, sparking a series of Black Lives Matter demonstrations across the country). Casemore also curated the work submitted by the galleries.

Casemore, who is a partner in the Casemore Kirkeby gallery in MSP, says the idea behind the group show was “to create something where the galleries were leading and their own curatorial voice was represented.”

“What happened was something truly collaborative and unique for the gallery community,” she says. “The response to the Albert Camus quote came from the heart of the galleries and the way that they were thinking about their identity during that time.”

Each gallery’s response to the Camus quote brought forward different aspects of the pandemic experience. Hung Liu’s 2016 oil “Fetching Water III,” presented by Rena Bransten Gallery, shows a group of children standing in a barren Oklahoma landscape during the Dust Bowl of the 1930s. The image is based on Liu’s fascination with Depression-era photographer Dorothea Lange, says gallerist Trish Bransten.

“The notion of resilience is part of the Camus” quote, says Bransten, who adds that the screen prints under glass by artist David Linger also carried forward the theme of resilience for her and are about “the binary of survival.”

The 2020 fiber sculpture “At Least Both Your Parents Are Brown” by Kira Dominguez Hultgren is constructed from brown yarn, silk, leather and decorative leather belts around a central crossed frame. Presented by Eleanor Harwood Gallery, the work “overtly channels invincibility, but more importantly takes the themes which Camus himself was wrestling through as the outsider/stranger in French Algeria and France,” Hultgren says in her artist statement. Harwood selected the piece because of its themes of struggles with racial identity.

“The essential struggle of America is our issues with race and class,” Harwood tells The Chronicle. She sees many of the issues of the COVID-19 pandemic as revolving around those same struggles.

Karen Jenkins-Johnson of Jenkins Johnson Gallery included work by artists whose spring shows were canceled due to the pandemic.

Wadsworth and Jae Jarrell were supposed to be the focus of a show presented by Jenkins-Johnson in the atrium that would have transformed the space with bright Kool-Aid paint colors on the walls and matching fabric draped throughout. The palette is a signature of the AfriCOBRA movement, of which the husband-and-wife duo are key figures.

Jae Jarrell’s “Bird of Paradise Jacket and Crown, Ode to Tie-Dyed Suede” garment sculpture and Wadsworth Jarrell’s vivid acrylic painting “Basie at the Apollo” are now presented against a red wall, offering a hint of the vision of the full show.

“Invincible Summer” and “In This Light” can be viewed on the robust virtual hub, Minnesota Street Project Adjacent, which not only allows viewers to “walk through” sections of the show as it is presented in the atrium but also presents the work up close with additional materials exploring the work and artists, including video interviews.

Deborah Rappaport says the new configuration of the space and how MSP operates both in-person and virtually probably won’t be the last.

“Clearly, for at least the next couple years, we’re going to be going through cycles of opening and closing,” Deborah Rappaport says of the pandemic. “The ability to remain flexible is going to be paramount as we remain committed to making art as accessible as possible.”

Both shows can also be viewed virtually through the digital hub Minnesota Street Project Adjacent at minnesotastreetprojectadjacent.com.