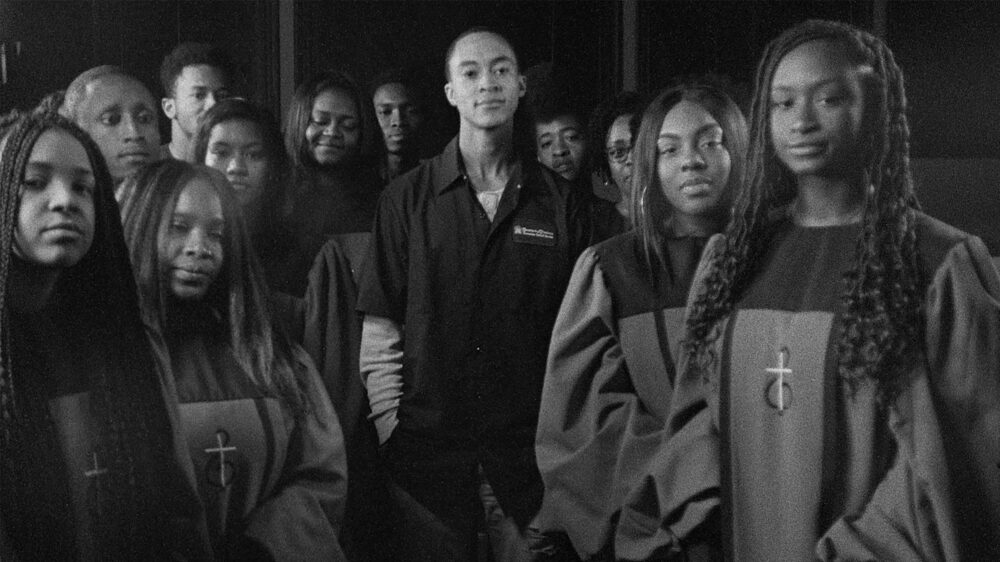 Curated by Bay Area artist and educator Leila Weefur and presented in McEvoy Foundation for the Arts’ Screening Room, New Labor Movements is a collection of short films that explore contemporary visions of America and concepts of transnational Blackness. Through a compositional discourse played out in four hour-long “movements” featuring fifteen films by seventeen artists, the program navigates the philosophical, psychological, and emotional landscapes that manifest in the lives of slavery’s descendants and those living in the aftermath of slavery’s indirect, proximal effects. The program was commissioned on the occasion of the West Coast premiere of Isaac Julien’s Lessons of the Hour at McEvoy Arts (October 14, 2020 – March 13, 2021). Movements I and II open at McEvoy Arts on October 14. Movements III and IV premiere in 2021.

Weefur organized New Labor Movements to consider the question of “What is America today?” as inspired by Lessons of the Hour, Julien’s immersive film installation and photography exhibition on the life and impact of Frederick Douglass. The act of movement is a structurally fluid principle that shapes the program in multiple coded ways, depending on the viewer. Chief among them are movements in film construction and narrative; in the distribution of labor and power; in reference to the trans-Atlantic movements of goods, capital, and people; and as it references the one’s movement through a gallery or in a theater. Weefur’s curation of these films prioritizes displays of movement as more of an experiential truth rather than a reactive condition. Just as we are living through an unpredictable emotional landscape, the films gracefully shift pace, matching the current political unrest with a poetic volatility.

Weefur states that “the included filmmakers measure movement with distinct cinematic voices and varied cinematic instruments, from high contrast black and white celluloid and archival imagery to refined HD digital pictures. Evidenced in the selection of films are thoughtful articulations of movement that reveal the nuance of global political critique and a profound broadness of Black life across borders.” Taken together with the multi-sensorial, meditative qualities of Lessons, the program engineers a gender diverse, intergenerational dialogue amongst filmmakers that explores the creation of cinematic narrative and Black political history.

Movement I: Assembly presents five films that orient the viewer to linkages between the creation of Diasporic history and collective experience. Assembly is introduced by the 16mm black-and-white shots of an African American gospel choir in Kevin Jerome Everson and Claudrena Harold’s elegiac Hampton (2019) and also includes works by Garrett Bradley, Christopher Harris, Onyeka Igwe, and Mitch McCabe. Across three films by Eden Tinto Collins and Adrien Gystere Peskine, Lonnie Holley and Cyrus Moussavi, and Morgan Quaintance, Movement II: Resistance/Selfhood identifies realizations of the self within societal narratives of struggle and triumph. The struggle is acutely seen in Holley and Moussavi’s I Snuck Off the Slave Ship (2019), which finds the self-taught African American artist and dimensional traveler attempting to sneak off the slave ship America in a metaphor for Black transcendence. Woven throughout the two movements are the visions of Black ancestors, elders, and children, coalescing into a visual guide to reconsider movements as acts of power, liberation, and achievement.

Assembly and Resistance/Selfhood screen daily in 2020. Movements III and IV, as well as additional programs in conjunction with New Labor Movements, are to be announced.

Leila Weefur (She/They/He) is an artist, writer, and curator whose work in video and installation brings together concepts of the sensorial memory, abject Blackness, hyper surveillance, and the erotic. Weefur has worked with local and national institutions including the Berkeley Art Museum and Pacific Film Archive, Smack Mellon, New York, San Francisco Museum of Modern Art, and The Wattis Institute, San Francisco. Weefur is a recipient of the Hung Liu award, the Murphy & Cadogan award, and the Walter & Elise Haas Creative Work Fund. They are a lecturer at the University of California, Berkeley, and a member of The Black Aesthetic. Weefur received their MFA from Mills College and is based in Oakland, CA.

Lessons of the Hour is a moving image and photography exhibition by British filmmaker and installation artist Isaac Julien. It explores the life of Frederick Douglass, the visionary African American writer, abolitionist, statesman, and freed slave through reimaginations of his most compelling speeches and moments from his private life. The centerpiece of the exhibition, Julien’s ten-screen film installation Lessons of the Hour — Frederick Douglass (2019), offers a contemplative, poetic journey into Douglass’ life and legacy. The film installation is accompanied by Julien’s tintype portraits and mise en scènes photographs of the film’s subjects as well as a complementary grouping of works from the McEvoy Family Collection, selected by Julien and independent curator and writer Mark Nash.

Isaac Julien and Leila Weefur appear in an online conversation to discuss the poetics and architecture of cinema in their exhibitions concurrently on view at McEvoy Arts. The conversation is moderated by Greg Niemeyer, Chair and Professor for New Media in the Department of Art Practice at the University of California, Berkeley. It is co-produced by McEvoy Arts, Berkeley Art Museum and Pacific Film Archive, and Berkeley Arts + Design.