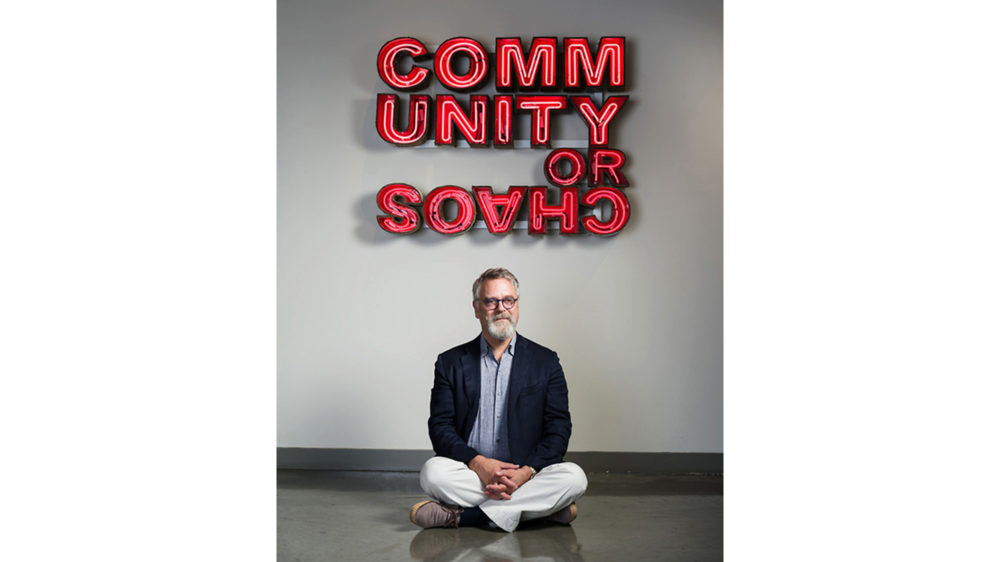 “As a publisher, I have a background in storytelling,” says Nion McEvoy, the owner and CEO of Chronicle Books. “Putting together an art collection is a non-verbal way of telling stories about how you perceive the world.” McEvoy has amassed some 3,000 artworks over the past 25 years, a selection of which feature in “la mère la mer,” or “the mother the sea,” the inaugural exhibition of the McEvoy Foundation for the Arts in San Francisco. When asked why he’s gone public, he deadpans, “Not because I am an exhibitionist. That would be the wrong reason!” A curious balance of poised and playful, McEvoy adds, “You can’t just tell your stories to the mirror all the time. What’s the point? The point is sharing them.”

Judging from the works in the inaugural exhibition, McEvoy has an eye for beauty (particularly in the female form), optical experimentation and the primal dramas of nature. “As a collector,” explains art dealer Jeffrey Fraenkel, “Nion has a boyish sense of adventure and a confidence in his own eye that is unusual.” McEvoy sees his collection as “high-low.” It was initially driven by subjects such as music and books, then by specific photographers, and more recently by an interest in contemporary art in general. “I am not a baseball-card collector, who needs every player on the team in a certain year,” he asserts. “I don’t have the patience or the bandwidth. Art, for me, is about experience, not about filling out some kind of set.”

McEvoy comes from a family of major collectors. Back in the 1850s, his great-grandfather Michael de Young borrowed $20 to buy a printing press and co-founded the Daily Dramatic Chronicle, which “told gold miners where the shows were,” as McEvoy puts it with a bashful chuckle. Then, on April 15, 1865, the paper was the first to print the news of Abraham Lincoln’s assassination, a scoop that eventually gave birth to the San Francisco Chronicle. De Young spent some of his newfound wealth collecting big-ticket European art, and his name lives on in the form of a museum in Golden Gate Park. (None of his descendants bear the name De Young, as only his daughters had children. And, true to the Wild West, his brother was shot dead by the son of a San Francisco mayor.)

McEvoy’s paternal line was also deeply involved in the world of words. His grandfather, JP McEvoy, wrote dialogue for WC Fields, Shirley Temple and the Ziegfeld Follies while his father, Dennis, started the Japanese and Spanish editions of Reader’s Digest. His mother, Nan Tucker McEvoy, was a journalist and liberal activist who chaired the board of the Chronicle Publishing Company for many years. After sorting through the twists and turns of his family tree, I declare that his pedigree is impeccable. “No,” says McEvoy, shaking his head, “it’s .”

McEvoy was an only child who went to boarding school on the East Coast and spent a lot of time reading books, watching television and staring at album covers while listening to music. He studied literature at UC Santa Cruz, then examined the English language further at UC Hastings College of Law. After a stint drafting contracts at the William Morris Agency in L.A. and a “segue” with a hippie commune in Oregon, McEvoy returned to one of the family businesses.

Chronicle Books was set up exactly 50 years ago as a way to extend the value of the newspaper’s columns, and had early successes with coffee table books such as “Here Today: San Francisco’s Architectural Heritage.” McEvoy started work at the company in 1986 and became its sole owner in 2000, when the extended family sold off its holdings (and the Hearst Corporation purchased the newspaper business). McEvoy forged a licensing deal with Lucas Film—becoming the publisher of everything Star Wars. He also started a children’s division and continued the imprint’s expansion into illustrated nonfiction, cookbooks, graphic design, pop culture and stationery.

“Chronicle Books is one of America’s most essential publishing houses, and its presence on the West Coast makes it that much more important,” says Dave Eggers, author of “A Heartbreaking Work of Staggering Genius” and the founder of McSweeney’s, a literary journal. “In the 1990s, when the art of the book was in free fall, it was Chronicle—almost alone— who kept alive the notion that a book should feel good in the hands. Their attention to craft and detail was extraordinary. Now the rest of the book world has followed their lead in the belief that to compete with the digital world, the physical book has to be beautiful.”

Although McEvoy was part of the Whole Earth ’Lectronic Link and has been involved with projects emanating from MIT’s Media Lab, he prefers to read on paper. “I like the bright and shiny as much as anybody. At the same time, I also like sensuous things that have texture and heft.” This feeling fuels the publisher- collector’s attraction to both books and art. After asking if I am familiar with the teachings of the Japanese Zen master Thich Nhat Hanh, he recites: “Books are made of paper and paper is made of trees and trees can’t grow without sunshine, air and water. When you hold a piece of paper, you can feel all those elements in it.” Although great-grandpa de Young was born Jewish and died Catholic, McEvoy concedes that he is “kind of a Buddhist.”

Whatever his spiritual orientation, McEvoy has a strong conscience. He sits on the boards of UCSF (California’s premier medical school), the San Francisco Film Society, SFMOMA and the Smithsonian American Art Museum, among others. He recently started funding documentary films that have a “social impact or some redeeming value,” as he puts it, such as Chasing Coral, Obit and California Typewriter. He has also been known to back books he thinks are important, even if, as Amy Tan, author of “The Joy Luck Club,” says, “they are destined to be money losers.” McEvoy sometimes plays percussion with the Rock Bottom Remainders, a cover band featuring Tan and other authors like Stephen King. “Nion is A-list, but low-key, low maintenance,” says Tan. “He’s always positive, with astute reasons for loving the things he loves. He is a man for all seasons… and he’s serious about all the seasons.”