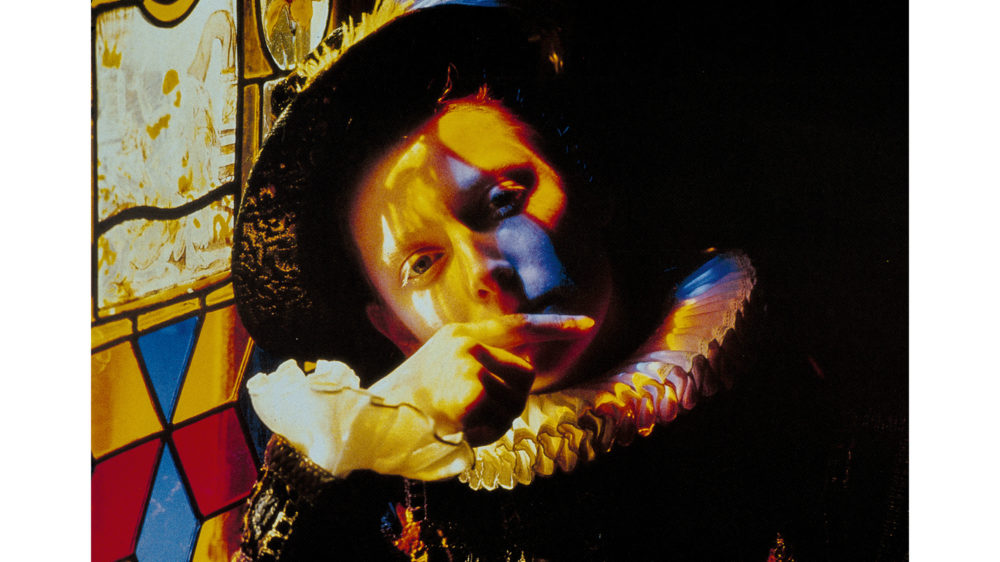 Preproduction image made by director Sally Potter to help secure funding for the film Orlando, spring 1988. Courtesy the artist

McEvoy Foundation for the Arts is pleased to be the first West Coast exhibitor of Orlando, guest curated by Tilda Swinton and organized by Aperture, New York. An opening reception is scheduled for Saturday, February 8, 5–8pm.

Orlando extends Swinton’s longtime exploration of the central themes of Virginia Woolf’s prescient 1928 novel: gender fluidity, limitlessness, and the deep perspective that is earned from a long life. The exhibition presents recent and newly commissioned photographs that arrive at a moment when debates around identity, representation, and society reinvigorate the story’s legacy. Aperture’s original projects are supported by artworks selected from the McEvoy Family Collection that continue to pose questions around these themes.

Orlando is McEvoy Arts’ first co-produced exhibition and its eighth since opening to the public in October 2017 in order to engage, expand, and challenge themes present in the McEvoy Family Collection. McEvoy Arts’ presentation of Orlando continues its practice of inviting curators and artists with varied perspectives to respond to the Collection and generate dialogue around vital issues in the contemporary visual and performing arts traditions.

The novel tells the story of a young nobleman during the era of Queen Elizabeth I who lives for three centuries without aging and mysteriously shifts gender along the way. In 1992, filmmaker Sally Potter released a now-classic adaptation of the book with Swinton in the starring role as Orlando. Since then, Woolf’s tale has continued to hold sway over Swinton, who describes the book’s ability “to change like a magic mirror.”

The exhibition offers a panoply of colors and tastes that seek to liberate traditions of portraiture in photography from the constructs of prescriptive gender or social norms. “Woolf wrote Orlando,” Swinton notes, “in an attitude of celebration of the oscillating nature of existence. She believed the creative mind to be androgynous. I have come to see Orlando far less as being about gender than about the flexibility of the fully awake and sensate spirit. Where I once assumed it was a book about eternal youth, I now see it as a book about growing up, about learning to live. The exhibition is a salute to limitlessness, and a heartfelt celebration of the fully inclusive and expansive vision of life exemplified by the extraordinary artists collected here.”

Orlando is accompanied by a video program in the Screening Room and a calendar of public programs that showcase additional perspectives about the exhibition’s themes, to be announced next month.

Orlando was originally presented at the Aperture Gallery in New York (May 24 – July 11, 2019). It is accompanied by Issue #235, Summer 2019 of Aperture magazine, guest edited by Swinton, featuring writings from Michael Cunningham, Isaac Julien, Lynne Tillman, and B. Ruby Rich. Copies are available at McEvoy Arts throughout the exhibition.

Aperture
Aperture, a not-for-profit foundation, connects the photo community and its audiences with the most inspiring work, the sharpest ideas, and with each other—in print, in person, and online. Created in 1952 by photographers and writers as “common ground for the advancement of photography,” Aperture today is a multi-platform publisher and center for the photo community. From its base in New York, Aperture Foundation produces, publishes, and presents a program of photography projects and programs—locally, across the United States, and around the world.