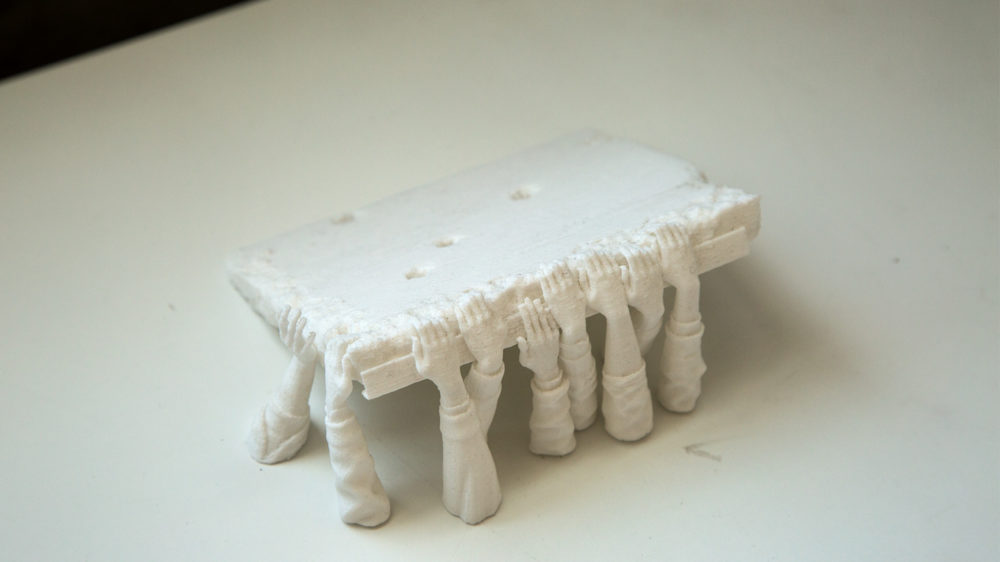 Screening Room: Alison O’Daniel: The Tuba Thieves
Exhibition: What is an edition, anyway?

What is an edition, anyway?, opening May 24, 2019, at the McEvoy Foundation for the Arts, engages contemporary artists and curators to present ready-made or creative work that responds to the titular question and explores the inventive expressions of the artist’s multiple.

Since opening in 2017, McEvoy Arts has collaborated with guest curators to interpret the themes present in the McEvoy Family Collection. What is an edition, anyway? furthers its mission by activating artists to contribute new works for presentation. The invited participants, each with practices deeply rooted in the Bay Area, variously employ photography, performance, illustration, film, installation, and new media to provoke further questions about creating artworks in editions.

Enrique Chagoya honors the value and role that the political poster holds to his own practice in editions with One Recession Watch Dog (Instant Update), 2011. The redesigned American one-dollar bill is embedded with a real-time digital display of the national debt and the share measured per U.S. citizen.

Daniel Clowes provides the original cover drawing for Eightball #8, 1992, from his ground-breaking comic book series from the 1980s–2000s. Additionally, Clowes includes his personal collection of Popsies—spring-loaded, hand painted figurines sold as novelty gag greetings in the 1960s and 70s—that share the graphic style of Eightball’s cast of characters.

Ala Ebtekar offers the Spring edition of a photographic series of four entitled Thirty-Six Views of the Moon, 2019, a body of work produced on the 50th anniversary of both the July 1969 Apollo 11 moon landing and the San Francisco State University strike for ethnic studies programs on campuses.

Jonn Herschend, co-founder of THE THING Quarterly, curates the series Performance as Edition featuring literary, comedic, and musical events with Porchlight, A Storytelling Series, the art collective Bonanza, and the punk band No Age. A limited run of posters for each performance, designed in collaboration with THE THING co-founder Will Rogan, are distributed at the events. Performance dates to be announced.

Stephanie Syjuco premieres Excess Capital (Double or Nothing), 2019, an experimental bookstore that only sells used copies of Capital: A Critique of Political Economy (1887) by Karl Marx that the artist has purchased for minimum bids on eBay. Syjuco muses on how the book’s many forms and editions—and its message—is valued in the marketplace by addressing this work to an audience of potential consumers. All proceeds from book sales are distributed to a charity of Syjuco’s choosing.

Hank Willis Thomas considers photography and its engagement with history and politics in a study for an unrealized sculptural work from his Punctum series that is drawn from an iconic 1989 photograph by Alfred Yaghobzadeh of hands tearing down the Berlin Wall. In considering the vast multiplicity of images in contemporary culture, Willis Thomas presents a Mamiya RZ67 camera body (ca. 2004) as a ready-made object that encapsulates ideas about conceptual framing and the representation of three-dimensional space in photography.

Tanya Zimbardo curates a program of video works from Alison O’Daniel’s The Tuba Thieves (2013–ongoing), for McEvoy Arts’ Screening Room. The series emerged in response to a spate of tuba thefts from Los Angeles high school marching bands. O’Daniel, who is hard of hearing, saw the loss of these tonally-rich instruments as analogous to her experiences of missing and filling in the gaps of conversations. O’Daniel joins Zimbardo at McEvoy Arts for a conversation on Sunday, July 21.

Their contributions are interwoven within an exhibition of limited-edition prints, book and album cover designs, musical recordings, and other multiples from the McEvoy Family Collection and the collection of Thomas Cvikota. Cvikota—co-curator of the first What is an edition, anyway? exhibition for Mana Contemporary Chicago along with Susan Tallman, editor-in-chief of Art in Print—presents editioned objects ranging from coveted artworks, to commercially distributed products, to rare ephemera. Multiples from John Baldessari, Bruce Conner, Ann Hamilton, David Ireland, Jasper Johns, Barbara Kruger, Glenn Ligon, Allen Ruppersberg, and Andy Warhol—among others—survey editions as a by-product of culture made possible by generational and technological advances. Artworks from the Cvikota and McEvoy Family Collections acknowledge the edition as an original and democratic ideal for both the artist and beholder—art for everyone.

Oops I Did It Again: Stories About Repetition
Hosted by Porchlight, A Storytelling Series
Saturday, June 1, 4:30 pm

Score for the Day Before
An audiovisual concert and tape-recording workshop presented by No Age
Saturday, September 7, 5 pm

Additional performances, talks, and workshops take place throughout the run of the exhibition and are announced at mcevoyarts.org. What is an edition, anyway? is presented in tandem with the San Francisco Art Book Fair (July 19–21, 2019). Tickets are made available at mcevoyarts.eventbrite.com in late-April.