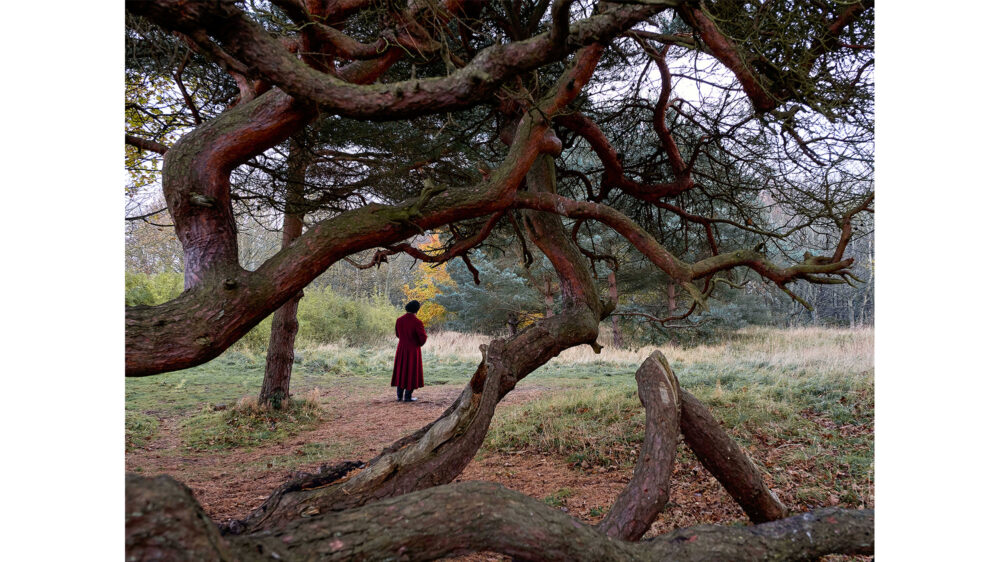 Exhibition: Lessons of the Hour
Exhibition: When Living is a Protest
In the News: The Many Sides of Frederick Douglass

After reading the satirical novel, The Good Lord Bird by James McBride (the great African American novelist), and then watching Ethan Hawke’s streaming version of it during quarantine, my pre-2020 image of Frederick Douglass has been a little bit battered. In that story, admittedly a fantasy and lampoon, he comes across as severely compromised, relishing his role as Black spokesman and celebrity, living in comfort and hesitant to rock the boat. Now comes Lessons of the Hour, an ambitious video installation by the Black British artist Isaac Julien at San Francisco’s McEvoy Foundation, which firmly ensconces Mr. Douglass back on his pedestal.

Julien, though a resident of London, has had a long-term presence in the Bay Area, having debuted here almost 20 years ago with an impressive video installation at Yerba Buena Center for the Arts, as well as having held a distinguished professorship in film at UC Santa Cruz. That 1992 exhibition in then state-of-the-art video offered mythopoetic depictions of an idealized gay lifestyle.  At McEvoy we see a project focused more concretely on the historicization of Douglass: his escape from slavery, his life as an abolitionist in the North, his eventual travel to England and Scotland, and his experience there as a lecturer and celebrity.

Using a voiceover text and occasional live-action speech of Douglas’ own words, this 28-minute work is projected in a semi-circle of ten suspended screens arrayed salon-style. The photography (hi-res video, 35mm film and found black-and-white footage) is lush and handsome, and the soundtrack is precise and affective. We first see Douglass in period costume with a gleaming red frock coat, walking through

picturesque woods, sun shining, birds twittering. His words describe how the pleasure of such a trek has been forever poisoned by the memory of having once come across a lynched slave hanging from a tree. This becomes a recurring motif: life’s pleasures and bourgeois comforts are constantly undercut for Douglass by the experience of slavery and the continuing reality of it for the great majority of African Americans at the time of Douglass’s writing.  Outrage oscillates with survivor guilt, the pleasures of acceptance by White and Black people in the North and Europe with hatred for a system and a people capable of imposing such unforgivable cruelties on the enslaved.

Julien points out the importance of women throughout Douglass’s life and career. The relatively short work uses only Douglass’s words, so there is no narrative exposition per se, but we come to intuit the centrality of his first wife (Anna Murray) in initially gaining and supporting his freedom, and later how other women, including his second wife, Helen Pitts, and Susan B. Anthony, both abolitionists and women’s suffrage activists, aided his cause. Both causes overlapped and fed each other.  Two British women, Anna and Ellen Richardson, raised the funds so that he could return to America a free man: a lovely scene shows them on the beach, writing “Send Back the Money” in the sand.  Here and throughout the video, we are led to see parallels between the Richardsons’ efforts and those of like-minded communities that today utilize online crowdfunding.

In a climactic scene, Douglass delivers a thundering address to an audience in London, the text of which consists of his famous, and brilliant, deconstruction of the meaning of the Fourth of July to those who are enslaved. Douglass’s relationship with the African American photographer James Presley Ball, Sr. is of particular interest. Ball opened Douglass’s eyes to the power inherent in photography. Also included are parts of an equally important major address by Douglass in which he discusses daguerreotypes, photography, technological innovation, and their cumulative impact on political reality and activism.  Subject to racist caricature during much of his free life, Douglass was excited by the increasing presence of photo documentation of his image – it spread his handsome and stylishly attired appearance for all to see. More than that, he felt that the objective proof of slavery’s misery seen in photographs would assist the abolitionist cause. While that may have been true at the time, we are again reminded of the undermining of objectivity by today’s white supremacist “fake news” campaigns and the conversion of Trump rioters into alleged Antifa rioters by simple lies. Julien acknowledges this complexity by including black-and-white police drone surveillance footage of urban distress on the streets.

Julien goes to great lengths to get his extensive images of 19th-century interiors and costumes just right.  These are augmented by a series of large color stills from the video on display outside the gallery as well as several smaller portraits of his characters in black-and-white.  From them, we can infer what an earlier age might have looked like when an artist recreates that time with meticulous care and respect for the dignity of those depicted. These video stills, with their perfectly crafted lighting, do just that, even if they are a little too perfect, too artificial.

One of the McEvoy Foundation’s presentation strategies is to always include a curated selection of photographs from its collection.  For this exhibition, Julien’s longtime collaborator, Mark Nash, selected fascinating historic journalistic images from the Civil Rights movement spanning 60 years. Julien’s use of photography and video to meditate on Douglass’s dream, that those media could achieve a kind of agency and truth for his people, provides an additional echo of the ongoing threads of thought between his time and ours.

“Lessons of the Hour: Isaac Julien” through April 24, 2021 @ McEvoy Foundation for the Arts.

About the author:
Renny Pritikin retired in December 2018 after almost five years as the chief curator at The Contemporary Jewish Museum in San Francisco. Prior to that, he was the director of the Richard Nelson Gallery at UC Davis and the founding chief curator at Yerba Buena Center for the Arts beginning in 1992. For 11 years, he was also a senior adjunct professor at California College of the Arts, where he taught in the graduate program in Curatorial Practice. Pritikin has given lecture tours in museums in Japan as a guest of the State Department, and in New Zealand as a Fulbright Scholar, and visited Israel as a Koret Israel Prize winner.  The Prelinger Library published his new book of poems, Dramas and Westerns, in 2020.