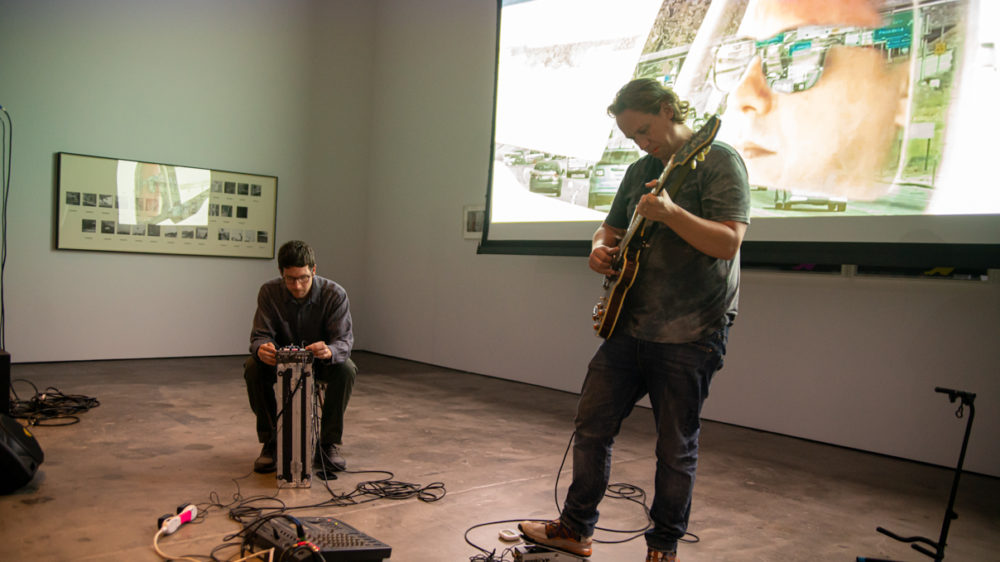 No Age performs at the McEvoy Foundation for the Arts in San Francisco on Sept. 7, 2019. Photos: Gary Chancer.

SAN FRANCISCO — Los Angeles punk band No Age on Saturday performed the closing program of the art exhibition “What is an edition, anyway?” at the McEvoy Foundation for the Arts. Bands generally don’t perform as part of an art exhibit, but that was sort of the point.

The theme of the exhibition at the Mission Bay art gallery was “editions;” copies of art, essentially, reproduced by the artist from the original. Most commonly this is applied to things like printmaking and sculpture, though the same concept extends to more modern formats like photography, digital video, or even visually composed writing like ‘zines and certain forms of poetry.

According to program curator Jonn Herschend, performance also falls into that category. The performers come up with a dance routine, song, or other type of expression, and they present a copy of it with minor variations for each show. It even applies to albums; what, really, is the difference between a CD and a print of a photo?

Herschend’s way to put that in a gallery was to ask No Age to drive up from L.A. to perform the second edition of their show Score for the Day Before, in which they produce a short film of their aforementioned drive from L.A. to San Francisco and improvise a musical score as it plays on a screen behind them. The show was also recorded and cassette tapes were produced during the closing reception following the show.

The concept is brilliant and I credit Herschend for thinking outside the box. In an exhibition that featured everything from an issue of the Black Panthers’ newspaper and a collection of different editions of Karl Marx’s “Capital,” looking at a concert in the same way was legitimately thought-provoking.

That said, the performance itself was definitely not for me. The rest of the audience clearly loved it and various nuances were the main topic of discussion at the post-show reception, but I simply didn’t get it. This, more than most concerts, was art, and art doesn’t necessarily land the same for everyone.

Despite being a punk band, the music was not traditionally punk. It was an ambient show featuring a droning synth-esque sound and a guitar that was not immediately identifiable as such. The film, billed as a road movie, was essentially a collection of layered B-roll, with one color from the primary footage (i.e. the blue of the sky, the black of the dashboard) replaced with a second piece of footage.

Due to the footage being behind the performers, calling it a score was a bit of a stretch since the music didn’t take many cues if any from the visuals. The footage itself was confusing, featuring things like the swirling of a Slurpee machine and several minutes of a piece of trash stuck in the brush on the side of the road.

All that said, that was my perception. Art is in the eye of the beholder and my eye was not the right one to behold it. I was in the minority in that regard. But as art, as a concept and as a contribution to the exhibition, it was inspired.

The point of art, as I understand it, is to let us see through someone else’s eyes, to share someone else’s understanding. As a music writer I see a lot of concerts and this show expanded my understanding of those performances in the greater continuum of artistic expression. So as a work of art No Age and Herschend succeeded, even if to me the performance itself did not.