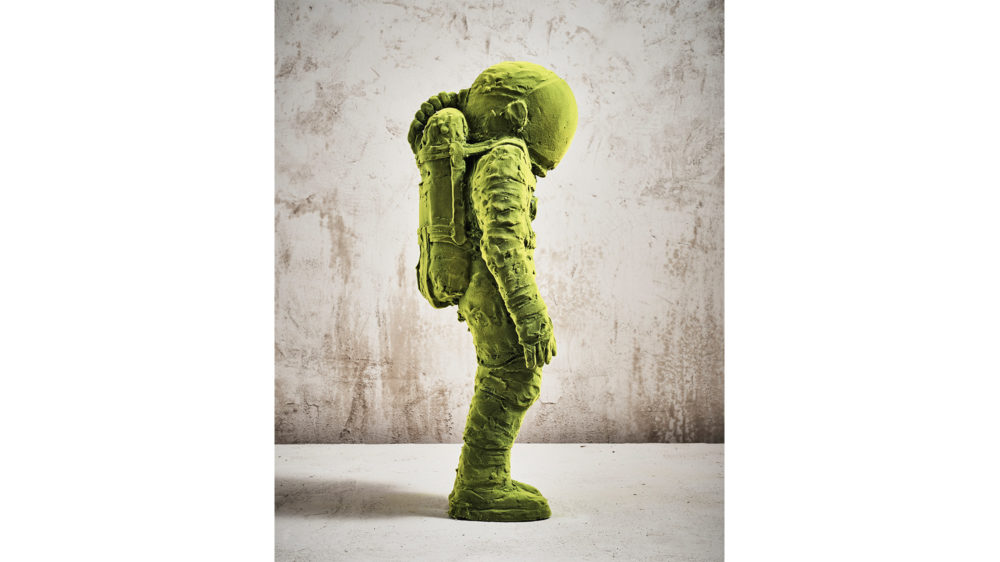 A year ago, photographer Cristina Mittermeier’s photograph of a starving polar bear on an ice floe transformed “climate change” from vague concept to horrific and searing reality. For many of the estimated 2.5 billion people the image reached, it was a visceral depiction of this possible, even probable, future.

Mittermeier’s photo underscored the power the image has to irrevocably shift how we think, a power leveraged in No Time, an ambitious, far-reaching exhibition at the McEvoy Foundation for the Arts, organized by curator and Executive Director Susan Miller. The show assembles more than 50 works that illuminate art’s ability to momentarily frame, shape and alter our ideas about the landscape and the natural world around us. Some works might even jar us out of complacency, compelling a deeper humility and perhaps a call to action in our own lives. In Graciela Iturbide’s humble black-and-white photograph, “Mujer Ángel, Desierto de Sonora, México” (Angel Woman, Sonora Desert, Mexico) 1979, a Mexican woman atop a mountain scans a desert landscape, boombox in hand. It’s an apt metaphor for the entire exhibition: we are merely visitors to this landscape, seeking our way, and bringing along our own soundtrack.

Trees loom large in many of the works, serving as graceful subjects, bystanders, or symbols. In “Tetons,” nature’s inherent beauty shines from Lee Friedlander’s barren and snow-drifted trees as they offer a luxuriant, lacy winter curtain. Larry Sultan’s “Backyard Hercules” (2008), by contrast, depicts a homeowner, dwarfed by eucalyptus trees that have showered his residence with their debris, as he hunches over a pool rake in futile ritual. A nearby Mitch Epstein photograph features a gigantic verdant pine that has managed to thrive straddling a cliff, its roots hanging in thin air.  Other works mine and subtly mock our tendency to mimic the natural landscape in built environments.  In Diane Arbus’ “A lobby in a building, N.Y.C.” (1966), a mundane office building lobby suddenly becomes a bucolic riverbank thanks to the magic of floor-to-ceiling wallpaper.

The show’s sculptural works are a highlight. Kim Simonsson’s installations—strange, surreal sculptures of tiny child travelers garbed in exploration gear and covered in bright green moss—appear in all three rooms of the exhibition, extending the notion that we are merely visitors on this planet. Tony Matelli’s stunning “Weed #414” (2018), a painted bronze of a flowering weed (indistinguishable from the real thing), is brilliantly staged in the space, a site-specific intruder appearing to grow out of a crack where the wall meets the floor.

In a companion media exhibition, film curators Kathleen Maguire and Samuel Sharkey assembled an extraordinary collection of 13 films and videos. Many films utilize the lens of abstraction, using technology and the element of time to tap into the seductive geometries and rhythms of natural forms and phenomena: waves, mountains, sun and light. Notable is Jan van IJken’s mesmerizing “The art of flying,” in which tens of thousands of starlings create undulating sculptures in the sky.

One cannot regard this work without the sobering realization that the show’s title really does mean no time; given recent reports, we’ve little more than a decade to shift the habits of the entire planet, or else face its likely demise. In Lars von Trier’s  2011 movie “Melancholia,” a giant silver planet heads towards a deadly collision course with Earth, and one of the characters fashions a flimsy, awkward loop of wire to track the planet’s closeness by its scale in the circle. The loop resembles a lasso, a fitting metaphor for his feeble attempt to contain the inevitable. Like the artwork in No Time, our efforts to frame and contain nature can certainly gift us with beautiful, poetic, indelible moments—but they also remind us that, in reality, nature cannot really be harnessed.