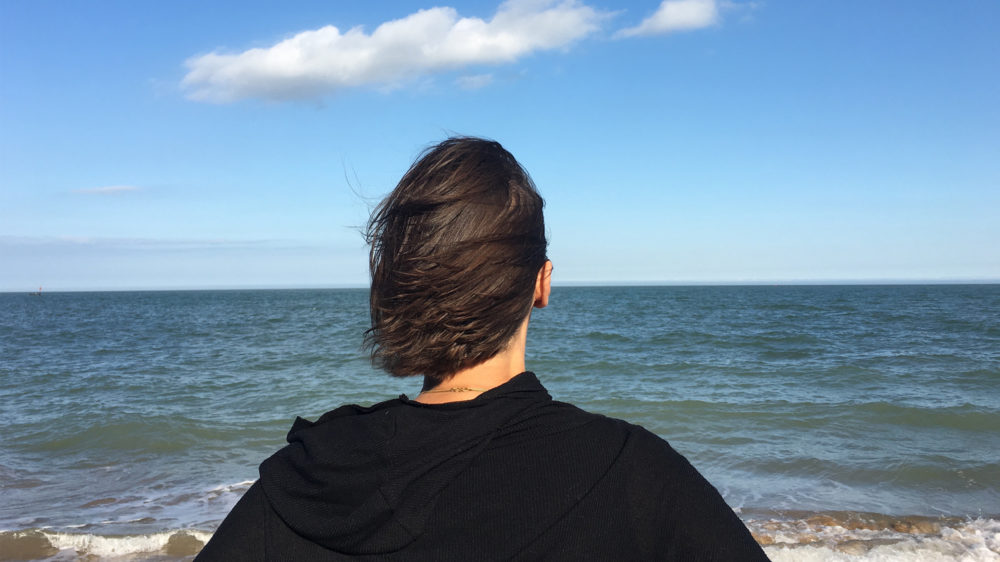 Julia Dogra-Brazell: For the last twenty years, I’ve experimented with narrative structure through film and video. Having moved to the south coast of England from London a few years ago, I answer you from there, close to the waves and sand you see depicted in the film. Transformed by the pandemic, it has become a siren landscape in which, we are told, no one should land and no one should linger.

JDB: Between Dog and Wolf is the first of a trilogy of longer works (including Past Perfect and Terra Incognita) started in 2018 for a show in London in 2021. Previous films have been fleeting (1–4 minutes in length) relying on the condensation of montage for effect. Though I once thought it impossible, for this trilogy I wanted to see if I could ‘scale up’ and slow down without losing any of the intensity or depth of the earlier works. Living by the sea has, in any case, altered the rhythm and pace of my editing. More things seem possible.

At some point the logic is in the edit, the subconscious.

JDB: I’ve always admired Woolf. The first book of hers I read was The Waves. I guess it was inevitable that I’d think of her again when making this film. She allows access to such provisional states of interiority. Finding a correct distance—whether making or receiving a work—seems vital to the exchange offered by such encounters. Coincidently in this regard, I first came across Tilda Swinton asleep in a glass box at the Serpentine Gallery (for Cornelia Parker’s The Maybe) in 1995. At a time when fewer people visited galleries, I found myself standing alone in the space—with Swinton potentially awake and aware of my presence or asleep and possibly even dreaming. It brought the whole question of distance to the fore quite literally.

JDB: Not consciously. The starting point for this particular piece was the stranger who brings something initially alien to a shore: whether, as in this case, the Romans, Vikings, St. Augustine, artists or, today, migrants attempting to make it to the UK in precarious boats. But when making, I have to let even that go. At some point the logic is in the edit, the subconscious. I never reference anything too specific in my work.

JDB: Imaginative and sensitive curation of this kind helps me to see that bearing witness—a preoccupation of much art-making today—is possible even from a slight distance and from an acute angle. I often worry about that. The balance between sustained resonance and specificity is a tricky business.

JDB: There are practical and financial issues right now, of course, but my biggest concern is what kind of world we will find ourselves in after this. We need to dream and think big, so we don’t go back to living unintelligently as a species.

JDB: Two pieces that really stay with me are Ryan Gander’s Locked Room Scenario (2011) and Tino Sehgal’s This Success/Failure (2007). They both put you on the spot when it comes to a response. More recently, the brilliant IFC series Documentary Now. It’s a great way to survive lockdown.

You can watch Julia Dogra-Brazell’s Between Dog and Wolf (2018) here. For more from McEvoy Arts at Home, click here.

Julia Dogra-Brazell works with film, video, sound and the still image in the context of experimental narrative. She has taught at LCC University of the Arts, Sotheby’s Institute of Art, Brighton University, and ECS/IEJ Media School.