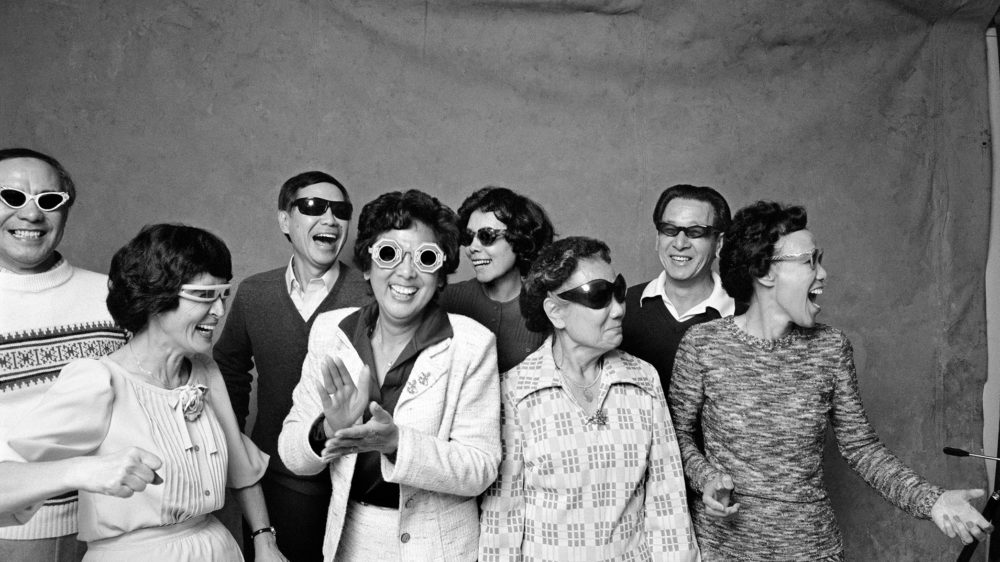 Michael Jang, Aunts and uncles from his series The Jangs, 1973, gelatin silver print. Courtesy of the artist / © Michael Jang

Out this month — to accompany a show at the McEvoy Foundation for the Arts in San Francisco — is a beautiful monograph of the work of the photographer Michael Jang. Born in 1951, Jang is Chinese-American, and grew up in Marysville, Calif., which is right outside Sacramento. From the start, he showed a natural affinity with the camera — his earliest pictures are of the Jang family in intimate moments: gathering at Christmas, watering the garden, doing the laundry. The pictures are playful, full of curiosity and laughter. Later, while attending school at Cal Arts, Jang found ways to rub shoulders with movie stars and politicians and other celebrities at the Beverly Hilton Hotel — he photographed figures such as Ronald Reagan, Jack Lemmon and David Bowie. Other moments, with crowds or bellhops, show how people and faces were fascinating for Jang. Afterward, he moved north to San Francisco, where he began to capture scenes on the street or out at night. It was the ’70s, and there’s something electric about seeing San Francisco through Jang’s eyes. I grew up in the Bay Area a decade and a half later, not too far from where Jang wandered around (and still does) — and though his pictures feel very familiar to me, that’s not why I find them so compelling. There’s something to admire in how technically precise Jang is in working in black and white — he seems to understand intuitively the depth of a picture before he even takes it, and I admire him more for how incredibly witty he can be, catching visual puns or simply revealing the humor of a particular moment: the college kid who has passed out sucking his thumb; the expression on the Sex Pistols’ Johnny Rotten’s face caught by surprise while lying low at Japantown’s Miyako Hotel. “Michael Jang’s California” is on view from Sept. 27, 2019 to Jan. 18, 2020 at McEvoy Foundation for the Arts in San Francisco. The book “Who Is Michael Jang?” $65, is available now at atelier-editions.com. — THESSALY LA FORCE