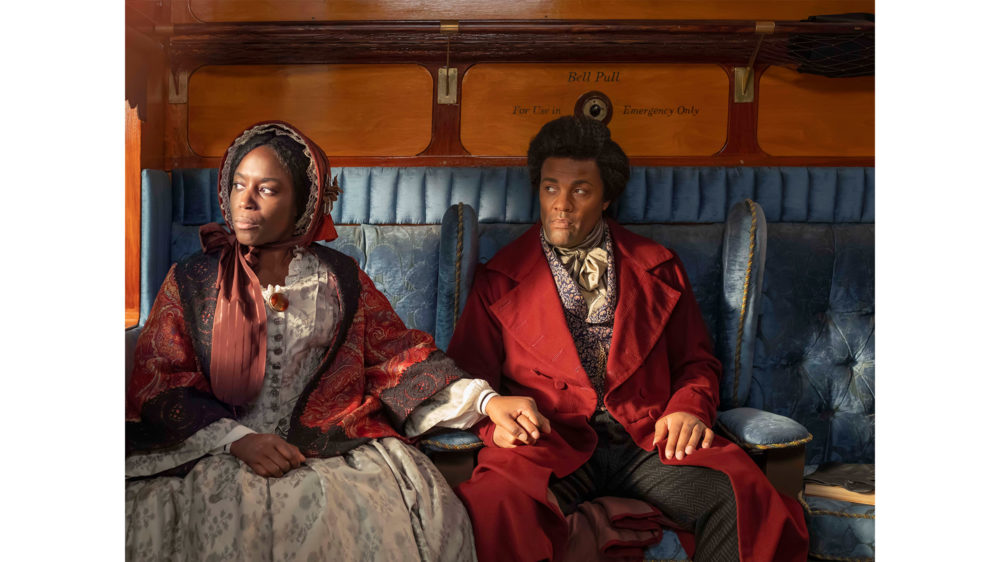 Exhibition: Lessons of the Hour
Screening Room: New Labor Movements
Exhibition: When Living is a Protest

In 1838, when Frederick Douglass escaped from slavery in Baltimore, photography required elaborate and expensive equipment that was unavailable and unaffordable for most. Even purchasing reproductions was cost prohibitive — especially for former slaves with no means of financial support. But by dawn of the Civil War in 1861, photography was so ubiquitous, that it was within reach for most Americans, even those with but a few pieces of silver jangling in their coin purse.

Douglass noted this in a seminal public lecture on photography, images, and politics, which he gave that year in Boston. “The humbled servant girl whose income is but a few shillings per week may now possess a more perfect likeness of herself than noble ladies and court royalty.”

British filmmaker Isaac Julien uses Douglass’ 1861 lecture in Lessons of the Hour – Fredrick Douglass, a 10-screen film project at the McEvoy Foundation for the Arts, where we see Douglass, the abolitionist, but also Douglass the photo historian, as he addresses issues of race, history, and photography’s potential to do for Black Americans what even Abraham Lincoln and the Civil War could not: Humanize them in the eyes of whites.

Julien directed actor Ray Fearon and a cast of others in his 30-minute recreation of Douglass’ life and ideas, which Julien juxtaposes at the film’s end with FBI surveillance video of Baltimore riots from 2015, when protestors clashed with authorities after police killed the young Black American Freddie Gray. Douglass was prescient in his articulation of imagery’s importance to public perceptions of African-Americans, Julien says.

“Douglass was utilizing photography as a vehicle to assert his own identity against the dominant representations, which were essentially scapegoating the Black subject,” Julien tells SF Weekly. “He was astounded at the way in which the white offering of the Black subject in figuration was always subjected to some hyperbolic kind of stereotypes or caricature that were demeaning and degrading — and that these were mirrored in everyday life in the aspects of lynching and the aspects of continuance of slavery, even after the emancipation. He was also thinking of the way that eugenics was being globalized as a new form of racism. And it was being utilized in photography as a new form of racism … He foresaw that every ‘colored person’ would be able to have an image of Douglass and themselves in their houses and parlors, and that this would be a counter practice to contest the dominant regime of representation that were being produced at the time.”

As he did with previous projects like Playtime, Julien’s 2014 film about capitalism that featured seven screens and starred a host of celebrated actors (Colin Salmon, James Franco, Maggie Cheung), Lessons of the Hour subverts the traditional one-screen format for an experience that lets audience members see different, simultaneous angles of the same scene; hear contrasting sounds that echo from screen to screen; and take in panoramas that juxtapose competing elements and extend the visual narrative into a poignant state of kaleidoscope dreams and nightmares.

One example: Early on in Lessons of the Hour, Fearon as Douglass walks with a long red coat amid a stunning glen of fall trees, whose orange and yellow leaves and bending, brown-and-red bark reach outward across the glen. The scene plays out at different tempos across all 10 screens as we hear the sound of nature permeating that glen — which then segues into more beautiful screens of yellows, reds, and greens, but with one screen showing Fearon’s Douglass looking upward at a tree, and a middle screen suddenly showing a slow-motion, black-and-white video of black legs hanging and swaying from a branch. We practically hear the bark bending from the tightening rope that’s engulfing the Black victim’s neck, as solemn stringed music begins to drive the scene forward. Douglass doesn’t have to say anything to convey what’s happening. Yes, Douglas’ indelible words anchor Lessons of the Hour, and Fearon — who’s a trained Shakespearean actor — delivers them in an unforgettable, Oscar-like performance that brings out Douglas’ own familiarity with Shakespeare. But it’s Julien’s unique style and visuals that push Lessons of the Hour into another realm.

“I’ve been making multiple-screen works since 1996, so I’ve been at the forefront of developing this language,” says Julien, who wrote about his practices in his book, Isaac Julien: RIOT, which MoMA published in 2013 to coincide with Julien’s nine-screen work called Ten Thousand Waves.

“There’ve been many people who’ve been excited by the use of multiple screens in my practices — and, dare I say, have been inspired and taken them on in their own practices.”

Julien has repurposed his other films into single-screen works whose excerpts and trailers can be shown on digital platforms such as YouTube. But Lessons of the Hour demands to be seen in person — especially during the pandemic, when the McEvoy Foundation for the Arts (like other Bay Area galleries and art spaces) has been requiring appointments to limit the number of visitors.

What that means in practical terms is those who see Lessons of the Hour in San Francisco can practically have the exhibit space to themselves.

Besides Julien’s film, McEvoy Foundation for the Arts is exhibiting a gallery of Julien’s related photos (especially arresting: Daguerreotype-like images of Fearon as Douglass and other actors from Lessons of the Hour); photos from the McEvoy Foundation’s collection that Julien and his longtime partner and collaborator, Mark Nash, curated and that narrate a history of the Black experience in America; and a film-video program that Oakland artist Leila Weefur organized about transnational Blackness and the United States.

Available at McEvoy’s website for free viewing: a 90-minute discussion from November between Julien, Angela Davis, and Harvard associate professor Sarah Lewis, whose research revealed that fully 20 percent of Douglass’ book collection centered on photography, and who said of Douglass: “He was very much fashioning himself as an art historian.” Douglass’ interest in photography as a medium of change will surprise those who know him primarily as America’s most prominent abolitionist. But as Julien and other Douglass researchers have pointed out: By the end of the 19th century, Douglass had become America’s most photographed person — even more spotlighted than Abraham Lincoln.

“This should be known by every single American,” Julien says. “That they don’t know these things is an abomination, and reflective of the lack of interest that Americans have had in the lives of really important Black people — and Douglass is one of them.”

Born in London to parents who immigrated from the Caribbean nation of Saint Lucia, Julien connects his interest to Douglass with his longtime interest in African-American culture, especially music. Douglass’ global prominence was also appealing. During his lifetime, Douglass spent many months lecturing against slavery in the United Kingdom, including Scotland, where part of Lessons of the Hour is situated. The University of Rochester’s Memorial Art Gallery, which is located in the East Coast city where Douglass lived for many years, commissioned Julien to make Lessons of the Hour. Julien, who premiered the film at Rochester in 2019, was able to film inside Douglass’ former house in Washington, D.C., besides filming in the United Kingdom. Julien now divides his time between London and Santa Cruz, where he’s Distinguished Professor of the Arts at UC Santa Cruz and co-director with Mark Nash of the Isaac Julien Lab. Besides learning filmmaking from Julien, UC Santa Cruz students travel to London to work at Julien’s studio for a quarter. Julien says his extensive teaching experience at the university level (he’s taught in Europe and throughout the United States, including at Harvard) is a crucial adjunct to his film projects because he’s helping shepherd a new generation of filmmakers into the ways of unconventional storytelling. Julien isn’t just a filmmaker. Another title that he applies to himself: Installation artist. At the McEvoy Foundation for the Arts, the 10 screens are situated in a salon-like setting — the way they might have been situated at an art event in Frederick Douglass’ time.

“I’m interested,” Julien says, “in developing new ways of spectatorship and theories of looking, and in using spaces as a site to activate this form of looking.”