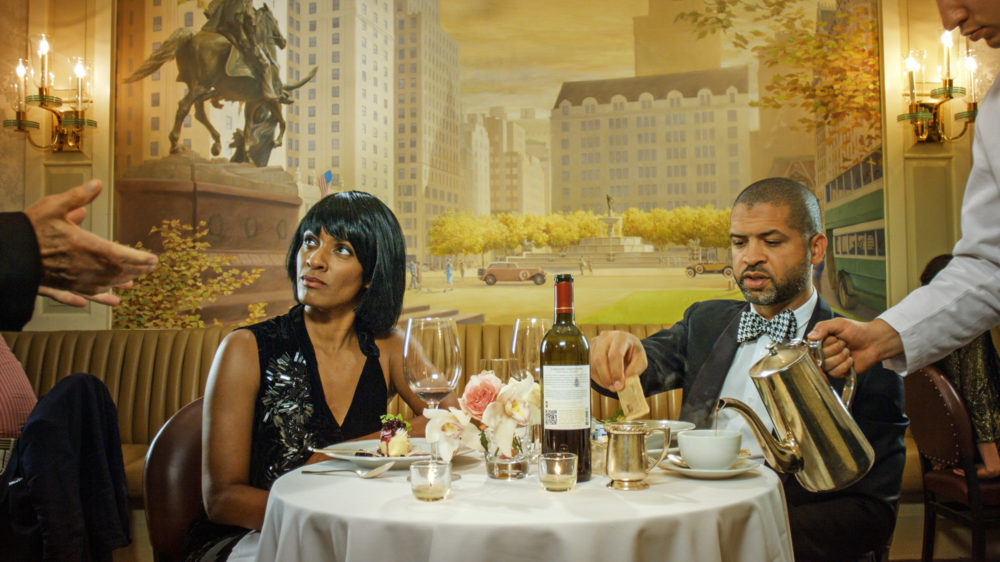 In his acclaimed book How to See, the painter, photographer, and writer David Salle argues for risk-taking, or forging ahead with ideas that forgo massive popularity and easy accessibility. That, Salle suggests, can create deeply original artworks that benefit not just the artist but the art-goer. You see this level of originality in his own work, including his “Ghost paintings” — a series of three sewn pieces on linen, each differently colored, that form a complex, shadowed photograph of a performer under a sheet.

You also see this level of originality in the work of Icelandic artist Ragnar Kjartansson and Canadian artist Ljubodrag Andric, showcased in separate San Francisco exhibits that play to each artist’s strengths. For Kjartansson, at the McEvoy Foundation for the Arts, that means a video installation with nine screens that incorporate unusual settings and indelible characters who do things for the camera (eat dinner, play music, swim laps, make love) that embody “scenes from Western culture.”

For Andric, at the Robert Koch Gallery, that means large-scale photographs of close-up scenes around the world (such as Vietnam, China, Italy, and South Africa) that depict a wall, often the ground, an occasional sky, and nothing else. No people. No movement. It’s minimalism — a striking, abstract minimalism — that rewards close attention.

Where Kjartansson emphasizes moving images — his nine-channel video projection of musicians, The Visitors, drew large crowds at SFMOMA over the winter — Andric is about stillness, and slowing down to notice contrasting relationships within his photos. Gallery-goers have been known to put fingerprints across Andric’s frames as they inspect his works. And those works have an artistic kinship with Kjartansson’s flat-screen videos, which are arranged like paintings at the McEvoy Foundation and feature mostly static camera shots that show the exact same setting as people, animals, and other things move in and out of the frame.

Kjartansson’s videos are an exercise in seeing time unfold in minimal ways. You have to give them the time to play out. And they can be frustrating, as with the two-hour video called The Boat, whose two main participants, Icelandic musicians Stephan Stephensen and Kristín Anna Valtýsdóttir, repeat a similar act (boating on a lake, returning to a pier, kissing, separating) again and again and again. Then there’s the three-hour video called Gentleman, in which Icelandic singer Kjartan Sveinsson (who, like Valtýsdóttir, was also in The Visitors) is clad in a tuxedo and stands by himself in a gallery-like venue — just him and the room, where he moves around every so often. The actors’ movements are practically Sisyphean. Even the youngish couple who caress and fuck on a white bed for 38 minutes in The Lovers repeat movements that art-goers may find, well, pedestrian.

Kjartansson has said that “Scenes from Western Culture” is both a damning critique and a celebration of its titular subject, packaged in videos that externalize his mixed feelings about a commodifying culture that bore and raised him. Kjartansson made “Scenes from Western Culture” in 2015, and the McEvoy Foundation exhibit features an early-18th-century painting, Jean-Antoine Watteau’s The Fortune Teller — on loan from the Fine Arts Museums of San Francisco — that speaks to the French painter’s influence on Kjartansson, who has said that Watteau “depicted with warmth and nihilism the joy of life and the overwhelming meaninglessness of it all in the culture of his day.”

“I really love Western culture, and then I’m also scared of it, like we all are, and see it as choking everything,” Kjartansson told Artspace in 2016 when asked about “Scenes from Western Culture.” “It’s a double-sided thing, absolutely. It’s both a praise and a critique, and I’m always interested in that gray area. I think that’s where most artists want to live, in the slippery gray area. It’s where things are interesting, where they’re not black-and-white. In religious terms, you could call it Satan’s area, because it’s always slippery, you know. And there’s no truth in it, but there’s this weird aesthetic or poetic truth, which is always what an artist, or just somebody who likes art, lives by.”

“This poetic truth” is what Andric digs out in his photo series at the Robert Koch Gallery. Andric spent 10 years on the series, traveling to countries in Asia, Africa, and Europe whose climates and cultures are different — but whose differences are masked in street scenes that art-goers wouldn’t be able to identify except for the image’s titles.

For Hanoi #4, Andric found a spot in Vietnam’s capital with colored roof tiles that was sandwiched by dusty, camel-colored earth and an otherworldly sky. Greater Hanoi has 7 million people, and its skyline is one of the world’s most polluted, with so much smog from car exhaust and other pollutants that health organizations regularly warn residents about the air’s ability to sicken them. But, paradoxically, Hanoi’s polluted skyline refracts the sun in odd, even beautiful ways. That’s what’s overhead in Hanoi #4. Below is ground with leaves that are covered in dust. Breaking through the earth is a single green leaf, whose color matches that of some of the roof tiles, which are covered with organic material.

In a phone interview from Toronto, Andric tells SF Weekly that he slightly retouched the ground of Hanoi #4 and a few areas to heighten color contrasts, luminosity, density, and — counterintuitively — make the scene more believable. Hanoi’s elements can bathe street scenes in light that Andric says is unforgiving.

“They’re just rebalanced,” Andric says of Hanoi #4 and other images he retouches on a computer. “It makes you feel that what you paid attention to when you were walking through something is totally different from what’s really there. Early Renaissance painting, like frescoes, had a powerfully abstract component to it. The reason it works is not the story but how the image is put together. It gives you a compelling feeling of something terribly important. That’s related to the fact that things are perfectly balanced in such a way — an order that’s been established. [My] imagery is about looking at the world with those eyes again. It’s more about looking again than finding something specific.”

But by homing in on scenes that are walls of yellow bricks (China #9) or a cement-colored wall with remnants of poster material (China #12), Andric broadens the possibilities of seeing the images.

“I always frame in camera and just deal with what is there and work with that,” he adds. “That first commitment is about proportions and relationships. You have to give life to what’s there. This imagery is not about subject matter — it’s definitely about relationships. It’s not about isolating. It’s about seeing relationships that hold things together. Rather than having an object that’s more important than others, suddenly you give everything the same value. The more you stand in front of it, the more it changes — you see more things. You can’t tell if you’re the one seeing these things and making them up or it’s just the nature of that image that makes you more attentive. It’s hard to determine. I don’t know the answer to that.”

That ambiguity is also what unites Andric’s work with Kjartansson’s. At McEvoy Foundation, couches are set up for people to watch his videos. The totality of time involved in seeing all nine Ragnar Kjartansson videos (almost 11-and-a-half hours) begs the question: How much time should art-goers spend watching Kjartansson’s output on what are essentially TV screens?

In How to See, Salle says that, “There’s no arguing the fact that today the audience for art has expanded exponentially, and one result of that expansion is that you can’t always tell the difference between art and entertainment.”

It is entertaining to watch the “Scenes from Western Culture” videos, but that isn’t Kjartansson’s sole mission. Like Andric, he lures people in with engrossing scenes, then invites people to linger as long as they want. The longer they linger, the more they see, and the more they question what exactly they’re seeing.

Concurrent with the exhibit: A music and film series of free events — co-presented with Noise Pop, Canyon Cinema, and the Roxie Theater — on select Thursday evenings at 7 p.m.